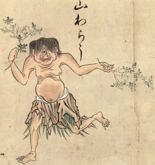 Yama-waro (also Yama-warau) are hairy, one-eyed Garappa who have gone into the mountains for the winter.

Yama-waro are hairy, one-eyed Garappa ( a variety of Kappa found in Kumamoto prefecture) of a child's size.

Like other varieties of Kappa, Yama-warau are fond of playing tricks on people, and they enjoy sumo wrestling. They sometimes break into people’s homes to take a bath or snatch food. They are also known to provide assistance to lumberjacks in the mountains, and they eagerly return again and again to help, as long as they are rewarded with liquor and rice balls.

At the spring equinox, Yama-warau return to the rivers to live as Garappa. They travel in groups, jumping from one rooftop to the next, all the way down to the water. If, along the way, they come across a new home under construction, they get angry and poke holes in the walls. Legend has it that anyone who goes to the river to catch a glimpse of a returning Yama-waro will become sick.

Yama-waro have a sixth sense for danger, which allows them to escape from people with evil intentions.