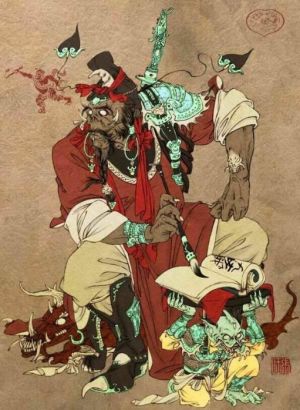 Fierce the appearance he is, the fair of heart he possesses; no matter deep jungle or black forest, surely obeying to his trials.

Yanluo Wang (simplified Chinese: 阎罗; traditional Chinese: 閻羅), also called Yan Wang is the senior king of the ten courts of the Chinese underworld. He looks into the former lives of the dead and assigns them to the appropriate king and court for punishments fitting their greatest sin or sins.

The name Yanluo is a shortened Chinese transliteration of the Sanskrit term "King Yama". In Korean, the same characters are pronounced Yomra and the deity is usually referred to as the Great King Yomra.

In both ancient and modern times, Yanluo is portrayed as a large man with a scowling red face, bulging eyes and a long beard. He wears traditional robes and a crown on his head that usually bears the kanji, which stands for "king.". In his capacity as judge, Yanluo is normally depicted wearing a Chinese judge's cap in Chinese and Japanese art. Yanluo sometimes appears on Chinese Hell Bank Notes.

Yanluo is considered to be an office or bureaucratic post, rather than an individual god. There were said to be cases in which an honest mortal was rewarded the post of Yanluo, and served as the judge and ruler of the underworld.

Yanluo is not only the ruler but also the judge of the underworld and passes judgment on all the dead. He always appears in a male form, and his minions include a judge who holds in his hands a brush and a book listing every soul and the allotted death date for every life. Ox-Head and Horse-Face, the fearsome guardians of hell, bring the newly dead, one by one, before Yanluo for judgement. Men or women with merit will be rewarded good future lives, or even revival in their previous life. Men or women who committed misdeeds will be sentenced to torture and/or miserable future lives. The second level of Diyu was ruled by king Chu Jiang and reserved for thieves and murderers.

The spirits of the dead, on being judged by Yanluo, are supposed to either pass through a term of enjoyment in a region midway between the earth and the heaven of the gods, or to undergo their measure of punishment in Naraka, the nether world, situated somewhere in the southern region. After this time they may return to Earth in new bodies.

There were four important judges, but among them Pan-Guan Cui was the most renowned. It was said “he can principle the world of living matters in daytime, and do Hades justice when the night breaks, trail living people and ghosts, omniscient as god himself”. That story, as it was named “The wise judgment to a wicked tiger” spread broadly. There was once a mountain – Diao-Hua - in the southwest Zhangzi county, and in the ancient times some beasts were said to have appeared about. One day a woodcutter who climbed the mountain to chop firewood was eaten by a tiger beast, leaving his widowed mother in deep sorrow. So she went to Pan-Guan Cui, and he instantly dealt with it – he sent a hunter, Meng-Xian, climbing in the mountains to arrest the tiger beast. Soon after the wicked tiger was caught in a county alley. In the court, Pan-Guan Cui counted the crimes one by one to the wicked tiger and he made a final judgment: “ Eating humans live, this crime does not yield amnesty”. After Cui died, local people wished to memorialize him so as such, they began to set up temples for sacrificial rites.