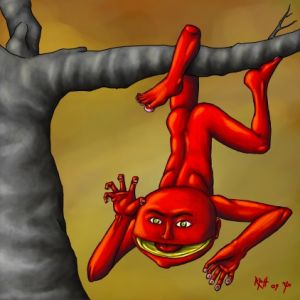 The Yara-ma-yha-who looks like a little red man, approximately four feet tall, with a very big head and a large mouth without teeth. It tips of the fingers and toes are shaped like the suckers of an octopus. But these suckers are used for more than grappling onto victims or other objects. The Yara-ma-yha-who can also use them to suck his victim’s blood.

The Yara-ma-yha-who lives in big trees and does not hunt for food, but waits until an unsuspecting traveler rests under the tree, then catches the victim and drains their blood using the suckers. It leaves enough blood in the victim to keep him alive while it goes off walking to work up an appetite. Later, the creature returns to its victim.

It lies down on the ground facing the victim, crawls to him like a lizard, and swallows him whole. The Yara-ma-yha-who then stands up on its two feet and does a sort of dance to jiggle all of the living body of its victim down into its stomach. But then, after some more time, the yara-ma-yha-who vomits its victim, who is still in one piece.

The person is then usually still alive. The victim then does best for himself by pretending to be dead. The Yara-ma-yha-who will test the victim by walking away from the body and then quickly turning around, by poking him with a stick, and by tickling him under under the chin and arms.

If the live victim has still been successful in feigning death, the Yara-ma-yha-who may then also walk off to some distance where it then sits and watches its victim for signs of life. But the creature will then eventually need to seek a bush and fall asleep. The victim, if indeed still alive, can then make his escape. If the Yara-ma-yha-who suddenly awakes and gives chase, the human victim has still a good chance of escaping. The creature has a slow, wobbling gait, like the cockatoo.

If it happens that the human victim does not escape from the Yara-ma-yha-who after being regurgitated, he is swallowed whole a second time. Again he is vomited out afterwards, but now he is shorter than he was before.