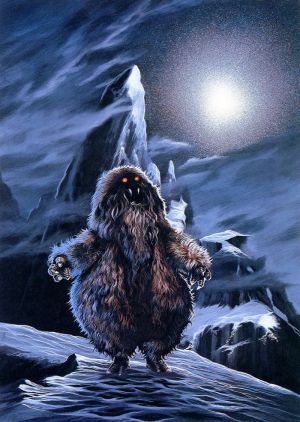 The Abominable Snowman by Andrew Skilleter

The yeti or Meh-Teh is a large primate-like cryptid supposedly living in the Himalayas.

The name Yeti is derived from the Tibetan yeh-ti, a compound of the words yeh, meaning "rocky" or "rocky place", and pe-tah, which translates as "bear", the full name being "rock bear". The ethnic Tibetans fear and worship the bear (as do many primitive peoples) as a supernatural being. It is a false cognate with Old English geottan (or yettin in Modern English), an antiquated word for an orc or troll.

Other terms used by Himalayan peoples do not translate exactly the same, but refer to legendary and indigenous wildlife:

The term Abominable Snowman was popularized by the press after Henry Newman, a reporter, interviewing the porters of the Royal Geographical Society's "Everest Reconnaissance Expedition" (led by Lieutenant-Colonel Charles Howard-Bury) in 1921, translated the word metoh as "filthy" or "dirty", substituting the term "abominable" for the Tibetan name Metoh-Kangmi.

Sherpas, Nepalis and Tibetans alike have described different types of Yeti; a larger variety is described as being a hybrid of man and ape, standing well over two meters tall and having a fur of a dark brown to black color. Another type is described as smaller than an average man with a reddish-brown pelt.

According to the Tibetans, stories of its existence date back to the 4th century BC when references to the Yeti are found in a poem called 'Rama and Sita'.

In 1832, Journal of the Asiatic society of Bengal published the account of B. H. Hodgson, who wrote that while trekking in northern Nepal, his native guides spotted a tall, bipedal creature covered with long dark hair, then fled in fear. Hodgson did not see the creature, but concluded it was an orangutan.

Perhaps the first formal record of reported yeti footprints was in 1889's Among the Himalayas, by L.A. Waddell. Waddell reports his native guides described the large apelike creature that left the prints; he concluded the prints were a bear's. Waddell heard stories of bipedal, apelike creatures, but wrote that of the many witnesses he questioned, none "could ever give me an authentic case. On the most superficial investigation it always resolved into something that somebody had heard of." 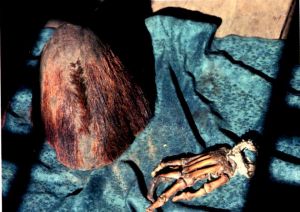 The frequency of reports increased in the early 20th century, when Westerners began making determined attempts to climb the many mountains in the area and sometimes reported seeing odd creatures or strange tracks

While leading Royal Geographical Society's "Everest Reconnaissance Expedition" on the Lhakpa La in the Everest region in 1921, Howard-Bury's expedition discovered many footprints at about 20,000 feet in altitude.

In 1925, N.A. Tombazi, a photographer (and, incidentally, a member of the Royal Geographical Society) saw a creature at about 15,000 feet in altitude, near Zemu Glacier. Tombazi later wrote that he observed the creature from about 200 or 300 yards' distance, for about one minute. "Unquestionably, the figure in outline was exactly like a human being, walking upright and stopping occasionally to pull at some dwarf rhododendron bushes. It showed up dark against the snow, and as far as I could make out, wore no clothes." About two hours later, Tombazi and his companions descended the mountain, and saw what they took to be the creature's prints, described as "similar in shape to those of a man, but only six to seven inches long by four inches wide.... The prints were undoubtedly those of a biped."

In 1942, after escaping from a Siberian prison, Slawomir Rawicz and his companions reported seeing two large, apelike creatures while crossing the Himalayas. They claim to have observed the creatures for several hours from a distance of about 100 metre (300 feet). However, critics have questioned the accuracy (and even the reality) of Rawicz's escape narrative.

Western interest in the yeti peaked dramatically in the 1950s. While attempting to scale Mount Everest in 1951, Eric Shipton took photographs of a number of large prints in the snow, at about 6,000 meters (20,000 feet) above sea level. These photos have been subject to intense study and debate: Some argue they are the best evidence of Yeti's reality; others disagree, and think the prints are a mundane creature's, distorted and enlarged by the melting snow.

During the Daily Mail Abominable Snowman Expedition of 1954, the largest search of its kind, the mountaineering leader John Angelo Jackson], made the first trek from Everest to Kangchenjunga and in the process photographed symbolic paintings of the yeti at Thyangboche Gompa. Jackson tracked and also photographed many footprints in the snow, many of which were identifiable; however, there were many large footprints which could not be identified. The flattened footprint-like indentations were attributed to erosion and subsequent widening of the original footprint by wind and particle action.

Beginning in 1957, Tom Slick, an American who had made a fortune in oil funded a few missions to investigate yeti reports. In 1959, feces reportedly from a yeti were collected by Slick's expedition. Analysis found a parasite but could not classify it. Bernard Heuvelmans wrote that "Since each animal has its own parasites, this indicated that the host animal is equally an unknown animal."

In 1959, actor Jimmy Stewart, while visiting India, reportedly smuggled the remains of a supposed yeti, the so-called Pangboche Hand, by hiding them in his luggage when he flew from India to London.

In 1960, Sir Edmund Hillary mounted an expedition to collect and evaluate evidence for the yeti and sent a yeti scalp from the Khumjung monastery to the West for testing. The results indicated that the scalp had been manufactured from the skin of the serow, a goat-like Himalayan antelope. But some disagreed with this analysis. Shackley said they "pointed out that hairs from the scalp look distinctly monkey-like, and that it contains parasitic mites of a species different from that recovered from the serow."

In 1970, British mountaineer Don Whillans says he saw a creature while scaling Annapurna. While scouting for a campsite, Whillans heard some odd cries. His sherpa guide told him the sound was a yeti's call. That night, reported Whillans, he saw a dark shape moving near his camp. The next day, Whillans observed a few human like footprints in the snow, and that evening, he asserted that with binoculars, he watched a bipedal, ape-like creature for about 20 minutes as it apparently searched for food not far from his camp.

In 1984, famed mountaineer David P. Sheppard of Hoboken, NJ, was near the southern Col of Everest and claims to have been followed by a large, furry man over the course of several days. His sherpas, however, say they saw no such thing. He claims to have taken a photograph, but a later study of it proved inconclusive.

There is a famous Yeti hoax, known as the snow walker film, created by Fox television network, in an attempt to deceive the public. The footage was created for Paramount's UPN show, Paranormal Borderland, ostensibly by the show's producers. The show ran from March 12 to August 6, 1996. Its origins had nothing to do with Fox Television, although Fox purchased and used the footage in their later program on The World's Greatest Hoaxes.

In 1997, Italian mountaineer Reinhold Messner claimed to have come face to face with a yeti. He has since written a book, My Quest for the Yeti, and also claims to have actually killed one. According to Messner, the yeti is actually the endangered Himalayan Brown Bear, Ursus arctos, that can walk upright or on all fours.

In early December 2007, American television presenter Josh Gates and his team reported finding a series of footprints in the Everest region of Nepal resembling descriptions of Yeti. Each of the footprints were measured as 33 cm in length - longer than a ruler - with five toes that measured a total of 25 cm across. Casts were made of the prints for further research.

Many cryptozoologists, after careful examinations of eye-witness reports and statistical evidence, have concluded that yeti reports are misidentification of mundane creatures. Well-financed expeditions have failed to turn up any positive evidence of its existence. One well publicized expedition to Bhutan reported that a hair sample had been obtained that, after DNA analysis by Prof. Bryan Sykes, could not be matched to any known animal. Analysis completed after the media release, however, clearly showed that the samples were from the Brown Bear (Ursus arctos) and the Asiatic Black Bear (Ursus thibetanus).

Enthusiasts speculate that these reported creatures could be present-day specimens of the extinct giant ape Gigantopithecus, as the only evidence (other than teeth) recovered from Gigantopithecus (its jawbone) indicates a skull rested upon a vertical spinal column (as in hominines and other bipedal apes such as Oreopithecus). However, while the yeti is usually described as a bipedal, most scientists feel that Gigantopithicus was probably quadrupedal, and so massive that unless it evolved specifically as a bipedal ape (like Oreopithecus and the hominids) upright walking would have been even more difficult for the now extinct primate than it is for its extant quadrupedal relative, the orangutan. Without evidence to support it, this suggestion must be regarded as highly speculative.

Himalayan wildlife attributed to the Yeti sightings include the Chu-Teh, a Langur monkey living at lower altitudes, the Tibetan Blue Bear, the Himalayan Brown Bear and the Dzu-Teh (commonly known as the Himalayan Red Bear).

Although there is no firm evidence to support yeti reports, some have noted the Himalayas are remote and sparsely populated, and that there is perhaps more room for the yeti's actuality than with bigfoot in North America.

The yeti has become a cultural icon, appearing in movies, books and video games. Mainly this is in the abominable snowman style, but occasionally as comic relief.