This illustration from a 17th century manuscript shows Yggdrasill with the assorted animals that live in it.

In Norse mythology, Yggdrasil (Old Norse Yggdrasill) is the World Tree, a great ash tree located at the center of the universe and joining the nine worlds of Norse cosmology.

Ygg means "terrible" and drasil "steed". Yggdrasil is litteraly translated as the "steed of the terrible one", with Yggr the epithet of the god Odin. In other words, Odin's horse, referring to the nine nights he is said to have spent hanging from the tree, or "riding the gallows", in order to acquire knowledge of the runes. The gallows are sometimes described in Old Norse poetry as the "horse of the hanged." In the case of "terrible steed", the association with Odin may be secondary, and any number of riders possible. A third interpretation, with etymological difficulties, is "yew-column", associating the tree with the Eihwaz rune.

Fjölsvinnsmál, a poem in the Poetic Edda, refers to the World Tree as Mimameid (Old Norse: Mímameiðr, "Mímir's tree" ). The tree is also probably identical to Laerad (Old Norse: Læraðr) a tree whose leaves and branches reach down to the roof of Valhalla and provide food for the goat Heidrun (Old Norse: Heiðrún) and the stag Eikthyrnir (Old Norse: Eikþyrnir).

The trunk of the tree may be thought of as forming a vertical axis around which these worlds are situated, with Ásgard, realm of the gods, at the top and the Hel, located in Niflheim, at the bottom. Midgard, our world that is inhabited by humans, is located in the middle and surrounded by Jötunheim, land of Jötunn, both of which are separated by the ocean. 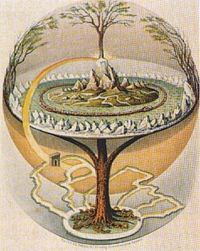 This illustration shows a 19th century attempt to visualize the world view of the Prose Edda.

Yggdrasil features prominently in Völuspá, the first poem of the Poetic Edda. In stanza 2, the völva (or seeress) who advises Odin, recalls her own ancient past when the universe was young. Yggdrasil 'the glorious Mjötviðr' was still a seedling 'before the ground below' existed. The name mjöt-viðr means the 'wood of proper measure', describing the harmony of the living universe, where every feature has its proper amount.

In stanza 19, the völva provides a description of the tree:

"I know that an ash-tree stands called Yggdrasill,
a high tree, soaked with shining loam;
from there come the dews which fall in the valley,
ever green, it stands over the well of fate."

In stanza 20 she recounts the appearance of the three Norns.

Stanza 27 is more obscure, with the first two lines of the verse indicating a connection with Heimdall:

"She knows that Heimdall's hearing is hidden
under the radiant, sacred tree;"

Scholars including John Lindow and Carolyne Larringtonhave suggested that Heimdall may have sacrificed one of his ears in return for his heightened power of hearing (according to Gylfaginning he can hear grass growing on the earth or wool on the backs of sheep), depositing it in the well in much the same manner that Odin pledged an eye to the Well of Mimir in return for knowledge and wisdom. Indeed, the völva refers to this Odinic sacrifice in the second half of the stanza and in stanza 28.

Finally, in stanza 47 the seeress foretells that Yggdrasil will tremble and groan during Ragnarök, the final conflict between the gods and giants. Although we are not specifically told if the tree survives the fiery conflagration of Surtr, the rebirth of the world and a new generation of gods and men are positive indications.

John Lindow explains how Gro Steinsland's analysis of Völuspá and the emphasis on Yggdrasil throughout the poem shows that the tree brought not only spatial unity but also chronological unity, from its presence in seed in the past (stanza 2), as a place of sacrifice and assembly in the present (27), as a symbol of the demise of the cosmos (47), and finally as a symbol of the new world represented in the wooden lots chosen by the god Hoenir for runic divination with a prophetic eye to the future ).

According to the poem Hávamál, Óðinn paradoxically hangs himself from a tree (usually taken to be Yggdrasil although it is not explicitly identified as such) as a human sacrifice to himself, who remains alive as a divinity. He suffers the pain and hardship of this transcendent consciousness for nine nights, in order to acquire knowledge of the runes.

138.
"I know that I hung on a windy tree
nine long nights,
wounded with a spear, dedicated to Odin,
myself to myself,
on that tree of which no man knows
from where its roots run."
139.
"No bread did they give me nor a drink from a horn,
downwards I peered;
I took up the runes, screaming I took them,
then I fell back from there."

Here name for the World Tree, Ygg-drasill, means the 'terrible steed'. Relating to the shamans of the Saami, a person can send out their Hugr ('soul', 'mindforce', or 'consciousness') to travel via the Tree from one world to another. To contemplate the entirety of all worlds and transcend them to peer out across the infinite nothingness of Ginnungagap, awakens existential power. Óðinn 'rides' the Tree to reach a trance-like experience that transcends the worlds of life and death, to achieve the power over reality in the form of written language. 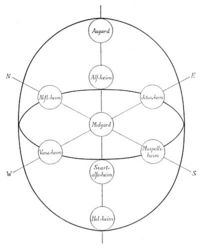 Diagram of one interpretation of the Nine Worlds of Norse Mythology.

The poem Grímnismál has much to say concerning Yggdrasil. According to stanzas 25 and 26, the goat Heidrun stands atop the roof of Valhalla and feeds from the leaves and branches of the tree. From her udder flows an endless supply of mead for the einherjar. Likewise, the stag Eikthyrnir also feeds from the tree atop the roof of the hall, and from his antlers water drips into the wellspring Hvergelmir, located in Niflheim and from which all rivers flow. In both stanzas the tree is called Laerad but is often identified with the World Tree. Both share similar locations relative to the hall of Odin, both are associated with animals who derive nourishment from its foliage, and Hvergelmir as well shares a connection with both trees.

Stanzas 29 to 35 provide further details. Each day the gods ride to Yggdrasil to hold court and pronounce judgments. The three roots of the tree grow in three separate directions, the first into Hel, the second among the frost giants (whose realm is not named but presumably is Jotunheim), and the third among humans or Midgard. In the Gylfaginning section of the Prose Edda, the third root (among mortals) is instead placed by Snorri Sturluson in Asgard among the Æsir. The stanzas also mention yet more creatures that populate the tree, including four stags four stags that gnaw the highest boughs, named Dain, Dvalin, Duneyr and Durathror, as well as a horde of serpents:

34.
"More serpents lie under the ash of Yggdrasill
than any fool can imagine:
Goin and Moin, they are Grafvitnir's sons,
Grabak and Grafvollud,
Ofnir and Svafnir I think forever will
bite on the tree's branches."

In addition, an eagle sits perched above while the dragon Nidhogg rends the tree from beneath, and serving the role of a messenger bearing spiteful words between the two is a squirrel named Ratatosk who must run up and down the length of the trunk which is gradually rotting. "The ash of Yggdrasil suffers agony more than men know", and yet according to stanza 44 it is still the "noblest of trees."

Fjölsvinnsmál, forming the second part of the poem Svipdagsmál, twice mentions a tree called Mimameid ("Mimir's Tree") which is usually considered identical to Yggdrasil due to Mímir's connection with the World Tree as the keeper of one of its wellsprings. According to the poem, it has mysterious roots, casts its limbs abroad over every land and is impervious to fire and iron. Its fruit when eaten by women has the power to ensure safe childbirth, and at the top of the highest bough perches a golden rooster named Víðópnir.

In the Gylfaginning section of his Prose Edda, Snorri Sturluson repeats much of the information found in the Poetic Edda but also expands upon certain ideas and uses the earlier material as the basis for his own conceptions of Yggdrasil. According to Snorri, one of its roots extends into Niflheim at the wellspring of Hvergelmir which is infested with serpents. Here the root is gnawed upon by the dragon Nidhogg. A second root extends among the frost giants "where Ginnungagap once was" at the Well of Mimir, a source of knowledge and wisdom. The third reaches into Asgard among the gods (in the Poetic Edda this root instead extends into Midgard among mortals), and here is located the Well of Urd, a holy place where the gods hold their court. Each day they ride there across Bifröst the rainbow bridge with the exception of Thor who walks.

Also located under the ash by Urd's well is the hall of the Norns who sustain the tree using water from the well. They mix the water with the mud that lies around the well (forming a curative poultice) and pour it over the tree so that its branches may not decay or rot, and to regenerate it from the wounds caused by the various animals and monsters that feed from it. There are also two swans that drink from the well, and this water is so pure that all things that touch it are turned white, including this first pair of swans and all those descended from them, as well as the "white mud" or "shining loam" used by the Norns. Yggdrasil is also said to be the source of honeydew that falls to the earth and from which bees feed.

Other ideas borrowed by Snorri from the Poetic Edda include the eagle which sits perched at the top of the tree, which he expands on. This eagle, who is not named, is said to have knowledge of many things, and on its head sits a hawk called Vedrfolnir. The significance of th is hawk is unclear but John Lindow suggests that it may represent a higher faculty of wisdom, possibly sent out to acquire knowledge in a similar manner as Odin's ravens Hugin and Munin.

Yggdrasil is also central in the myth of Ragnarök, the end of the world. The only two humans to survive Ragnarök (there are some survivors among the gods), Lif and Lifthrasir, are able to escape by sheltering in the branches of Yggdrasil, where they feed on the dew and are protected by the tree.

Yggdrasil apparently had smaller counterparts as the Sacred tree at Uppsala, the enormous evergreen of unknown species that stood at the Temple at Uppsala and Irminsul, which was an oak venerated by the pagan Saxons and which was said to connect heaven and earth. The Old Norse form of Irmin was Jörmun and just like Ygg, it was one of Odin's names. Irminsul may have been representing a world tree corresponding to Yggdrasil among the pagan Saxons.

Germanic cultural fondness for tree symbolism appears to have been widespread, with other patron trees such as Thor's Oak appearing in surviving accounts (8th century) and Ahmad ibn Fadlan's account of his encounter with the Scandinavian Rus tribe in the early 10th century, describing them as tattooed from "fingernails to neck" with dark blue "tree patterns."

The Germanic custom of hanging sacrificial victims from trees was probably in reference to this myth (see also Human sacrifice, Tyr, Blót). In 1950, the preserved corpse of the so-called "Tollund Man" was found in a peat bog in Jutland. The excellent level of preservation made it possible to deduce that he had been ritually hanged and respectfully consigned to the bog, not more than a hundred yards from where a ritually hanged woman had been found some decades previously.