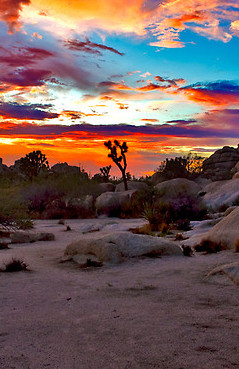 The Yucca Man is a Bigfoot-like creature that supposedly live around Joshua Tree National Park.

The Yucca Man is described as a large and hairy desert beast.

On a cold February night in 1971 a lone guard manned a post outside an armory on the outskirts of the Marine Base near Twenty-Nine Palms. Without warning the otherwise unearthly quiet was suddenly shattered when a large mass appeared out of the dark desert landscape. The guard raised his riffle and commanded the being to "halt". Much to the young mans surprise the large figure did not stop but instead charged right at him at an inhuman rate. As the figure grew closer the Marine realized what was approaching, rapidly, was not a man at all, but a huge, upright running, hair covered creature. Paralyzed by shock, the young guard stood his ground, too frightened to move.

The mysterious creature threw the young man to the ground rendering him unconscious. When the guard’s relief arrived several ours later they found him almost incoherent with his riffle almost bent in two.

After the incident both the CIA and FBI were called in to conduct an investigation. Much to their surprise, the locals were more than eager to tell their own stories about giant man-beasts in the area.

As a matter of fact, on the very same night as the attack on the guard, two of the creatures were seen roaming through a neighborhood, relatively close to the base. When a local couple took a look outside of their front window to see what was upsetting their dog, they saw the two Yucca Men crossing the front lawn. Then some time later the same creatures were seen near a horse corral some distance away by others in the same neighborhood.

The investigation also revealed that several employees at the Joshua Tree National Monument had seen Bigfoot-like creatures on numerous occasions.

Eight years later, in May of 1979, a young couple were leaving their condominium complex in Desert Hot Springs, north of Palm Springs, when a large harry creature emerged from behind a yucca in front of their car. According to the driver the animal, which had "a chest the size of a refrigerator and arms that hung down below its knees", was so large that he could only see it from the mid-section down. The beast that reportedly was covered in long tan colored hair disappeared quickly back into the night leaving no footprint evidence.

Also in 1979 a 12-foot-tall Bigfoot made a visit to Hemet, California some distance to the south of Palm Springs twice in a period of a week. This time, however, the creature left a grand total of 17 tracks in the mud along a rural road during its initial visit. These tracks measured 18 inches in length and were spaced some 6 feet apart.

Noted Bigfoot researchers Douglas Trapp and Danny Perez both conducted a investigation of this sighting, even going as far as to perform a "stakeout" of the location where the tracks were found. But alas, the monster did not return.

In 1988 a couple of service men from Twenty-Nine Palms were returning home from a day of fun in the sun at Big Bear Lake at about 9:00 p.m. when they encountered a creature that the locals call the "Cement Monster", due to the fact that it is said to live near an old cement factory in Lucerne Valley.

As the two men approached the old factory, a large upright running creature moved across the road in front of their car. As was the case 9 years earlier in Desert Hot Springs the animal in question was so large that the men could only see it’s lower half.

In disbelief the two men just looked at each other for a moment before one of them exclaimed "What the Hell was that?" The other replied, "That was the Cement Monster, after him!" The driver hit the brakes while the other reached for a gun that was in the glove box. The two adrenaline filed men searched up and down the road and around the cement factory, but never found any sign of the creature.

The pair came to the conclusion that they had seen some form of prehistoric man and returned to their journey home.

One possible explanation might include the unusual shape of the Joshua trees themselves, which can appear human in an instance of poor light.