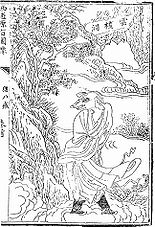 Zhū Bājiè ("Pig of the Eight Prohibitions"), also known as Zhū Wùnéng ("Pig Awakened to Power"), is one of the three helpers of Xuanzang in the classic Chinese novel Journey to the West. He is called "Pigsy" or "Pig" in many English versions of the story.

Zhu Bajie looks like a terrible monster, part human and part pig, who often gets himself and his companions into trouble through his laziness, gluttony, and propensity for lusting after pretty women. He is jealous of Wukong and always tries to bring him down.

Like his fellow disciples, Bajie has supernatural powers. He is capable of 36 transformations, and like his fellow disciple, Sha Wujing, his combat skills underwater are superior to that of Wukong. His weapon of choice is the jiǔchǐdīngpá ("nine-tooth iron rake"), a nine-tooth (jiǔchǐ) iron muck-rake (dīngpá) from Heaven that weighs roughly 5,048 kilos (or roughly 11,129 pounds).The novel makes use of constant alchemical imagery and Bajie is most closely linked to the Wood element, as seen by another one of his nicknames, Mùmǔ (木母, "Wood-Mother").

Once an immortal who was the Marshal Tianpeng of 100,000 soldiers of the Milky Way, he drank too much during a celebration of gods and attempted to flirt with Cháng'é, the beautiful moon goddess, resulting in his banishment into the mortal world. He was supposed to be reborn as a human, but ends up in the womb of a female boar due to an error at the Reincarnation Wheel, which turns him into a half-man half-pig monster. Zhu Bajie was very greedy, and could not survive without eating ravenously. Staying within Yúnzhan-dòng ("cloud-pathway cave"), he was commissioned by Guan Yin to accompany Xuanzang to India and given the new name Zhu Wuneng.

However, Zhu's indulgence in women's beauty led him to Gaojiazhuang Village, where he posed as a normal being and wedded a maiden. Later, when the villagers discovered that he was a monster, Zhu hid the girl away, and the girl wailed bitterly every night. At this point, Xuanzang and Sun Wukong arrived at Gaojiazhuang Village and helped defeat him. Renamed Zhu Bajie by Xuanzang, he consequently joined the pilgrimage to the West.

At the end of the novel, most of Bajie's fellow pilgrims achieve enlightenment and become buddhas or arhats, but he does not; although much improved, he is still too much a creature of his base desires. He is instead rewarded for his part in the pilgrimage's success with a job as "Cleanser of the Altars" and all the leftovers he can eat.