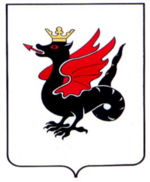 Zilant or Ajdaha is a legendary dragon in Turkic (Tatar) and Russian mythology which is mentioned in legends about the foundation of Kazan.

TEnglish transcription of Russian Зилант, itself a rendering of Tatar yılan (Cyrillic: елан). The Tatars themselves, on the other hand, frequently refer to this creature with the Persian word Ajdaha (Dragon) or Ajdaha-yılan (Dragon-snake). There is also speculations that Zilant's origination was not from the White Snake, but the Falcon (Börket), an image similar to Zilant from an earlier epoch.

Zilant is often confused with Aq Yilan (White Snake), which is the king of snakes as well as the medieval cockatrice.

Early Russian images represent Zilant with one head, four chicken legs, a bird's body and a snake tail. The modern perception of Zilant among citizens of Kazan today is strongly influenced by Western culture and many modern citizens imagine Zilant to be a more classically Western wyvern or dragon as depicted in films.

Yilan or Sahmara advised and helped epic heroes, batirlar, often by giving them gifts. As regards his *beneficial influence on humans, the White Snake is similar to the Chinese dragon. According to Idel-Ural beliefs, any snake that survives for 100 years turns into Ajdaha dragon. For Kazan Russians, Zilant had negative connotations, as it was represented as a Slavic dragon rather than a snake.

The popular historian Lev Gumilyov pointed out in his Ancient Turks that the Kypchaks, one of the ancestors of modern Tatars, came from the Zheliang Valley in the Altay Mountains. In his opinion, the nearby Zheliang Mountain and Zheliang settlement were named after Zilant the White Snake. After the 16th century Russians acquired this legend from Tatars. Hollander Carlus Allard noted that The Cæsar of Tatars once had two flags and Zilant was pictured on one of them, most likely the flag of Kazan.

These flying snakes were also known in Bolghar, Suar, Bilär and the other cities of Volga Bulgaria. For the most part, these snakes were benevolent. However, in the boundary fortresses of Kazan, Alabuga and Cükätaw, legends about flying monsters flourished. One particular fortress on the Shishma River was known as Yilantaw, later russified as Yelantovo. Many scholars believe that Zilant, like other flying snakes, symbolized the evil rulers of the neighboring pagan peoples. The legendary burning of the snakes may symbolize the victory of Islam over paganism. Sceptics say that the Bulgars purposefully spread those legends in the border regions in order to dismay their neighbors.