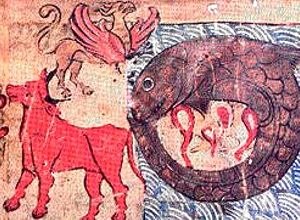 The ziz (Hebrew: זיז) is a giant bird in Jewish mythology.

Behemoth, Leviathan and Ziz were traditionally a favorite decoration motif for rabbis living in Germany.

The giant ziz lives on in children's literature where it is often portrayed as a clumsy, accident-prone, but kind-hearted creature who learns important lessons from God.