The Almasty or Almas, Mongolian for 'wild man', is a cryptozoological species of presumed hominid reputed to inhabit the Caucasus and Pamir Mountains of central Asia, and the Altai Mountains of southern Mongolia. Most mainstream scientists consider the Almas to be a purely legendary creature. 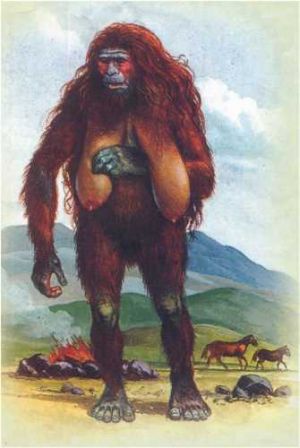 Almas are typically described as human-like bipedal animals, between four and a half to five feet tall, their bodies covered with dark hair, with anthropomorphic facial features including a pronounced brow-ridge and a weak chin. They are usually described as unclothed, but a handful of sightings refer to primitive clothing. Many cryptozoologist researchers have been struck by the similarity between these descriptions and modern reconstructions of how Neanderthals might have appeared.

With a height of five to six feet, very human looking and slightly ape-like, the Almasti is close to the Yeti but has shorter arms. He has less hair (black or brown) on the face and body than the other hominids. It feeds on berries. Sometimes it attacks sheep, but it eats only their liver. Being a nocturnal creature, it is very difficult to catch a glimpse of this elusive hominid. As a rule, the "snow man" leaves no traces of its death. In some cases, people have attempted to shoot the creature. These individuals reportedly died afterwards under mysterious circumstances.

The Caucasus Mountains, the Pamir-Altaï Mountains, West Mongolia, the Urals and the Russian Northwest (the Karelsky Isthmus, a 90-mile-long isthmus in Karelia, between the Gulf of Finland and Lake Ladoga). There have been interesting sightings in the Arkhangelsk Region as well.

Almas appear in the legend of local people, who tells stories of sightings and human-Almas interactions dating back several hundred years. Some of these accounts describe primitive communication between Almas and humans via the use of hand gestures and exchange of goods.

Drawings of Almas also appear in a Tibetan medicinal book. British anthropologist Myra Shackley noted that "The book contains thousands of illustrations of various classes of animals (reptiles, mammals and amphibia), but not one single mythological animal such as are known from similar medieval European books. All the creatures are living and observable today." (1983, p. 98)

Sightings recorded in writing go back as far back as the 15th century.

In 1430, Hans Schildtberger recorded his personal observation of these creatures in the journal of his trip to Mongolia as a prisoner of the Mongol Khan. Schildtberger also recorded one of the first European sightings of Przewalski horses. (Manuscript in the Munich Municipal Library, Sign. 1603, Bl. 210).

Nikolai Przhevalsky observed the animals in Mongolia in 1871 (Shackley, 94).

British anthropologist Myra Shackley in Still Living? describes Ivan Ivlov's 1963 observation of a whole family of Almas. Ivlov, a pediatrician, decided to interview some of the Mongolian children who were his patients, and discovered that many of them had also seen Almas. It seems that neither the Mongol children nor the young Almas were afraid of each other. Ivlov's driver also claimed to have seen them (Shackley, 91).

Russian researcher Alexei Sitnikov and his team of researchers reported a very strange encounter that took place in 1993, while on their way to Lake Tonee. The explorers had been planning to study the area for several years, but had been unable to do so because of a lack of resources and the wretched state of the Russian economy. Their plan was to determine the optimal time to conduct an expedition to search for proof of the possible habitation of a gigantic serpent in the region. (There have been numerous reports about the existence of such a serpent in the Far Eastern part of Russia, in the Primorskaya taiga).

The group of explorers had barely begun their trek when they had encountered a creature known to the locals as "snow man." They were crossing the river on a raft, and on the other bank of the river noticed a man who was covered with reddish fur. The creature turned around, made a sound resembling grunts, and then disappeared in the thicket. A few seconds later the raft had reached the shore, and Sitnikov with a colleague chased the creature. Their fellow explorer Sergei guarded the raft.

They did not find the creature, and came back to the river. Sergei did find a barely visible footprint at the site where they first sighted the "snow man." Sitnikov recalls that the creature was only three meters away when they saw it, and it was plainly visible. The weather was sunny and clear. The creature was about two meters in height; its fur was of a dark hue, and not thick.

Its head was somewhat triangular in shape, widening toward its base. (The base was straight, but from the forehead toward the crown the head narrowed.) The creature had small eyes, wide nostrils, and a slit in place of a mouth. The neck was not visible, and it looked as if the head was placed on wide shoulders. It possessed a powerful chest. Sitnikov had collected many descriptions of the "snow man" and has gathered statements from the local populace, including hunters who have encountered Bigfoot in the wilds. Secret settlements have been found deep in the thick woods.

A female "wildman" named Zana is said to have lived in the isolated mountain village of T'khina fifty miles from Sukhumi in Abkhazia in the Caucasus; some have speculated she may have been an Almas, but hard evidence is lacking.

Captured in the mountains in 1850, she was at first violent towards her captors but soon became domesticated and, indeed, was able to assist with simple household chores. Zana is said to have had sexual relations with a man of the village named Edgi Genaba, and gave birth to a number of children of apparently normal human appearance. Several of these children, however, died in infancy. Some commentators have attributed these early deaths to Zana's genetic incompatibility (as an Alma) with humans.

The father, meanwhile, gave away four of the surviving children to local families. The two boys, Dzhanda and Khwit Sabekia (born 1878 and 1884), and the two girls, Kodzhanar and Gamasa Sabekia (born 1880 and 1882), were assimilated into normal society, married, and had families of their own. Zana herself died in 1890. The skull of Khwit (also spelled Kvit) is still extant, and was examined by Dr. Grover Krantz in the early 1990s. He pronounced it to be entirely modern, with no Neandertal features at all. If Krantz' verdict on the skull is correct, and the skull itself is indeed that of Zana's son, it would indicate that Zana may have been a member of an isolated hunter gatherer tribe so culturally different from her captors' society as to make Zana seem non-human to them, even though she was indeed a modern human. How this may relate to the true identity of other reported Almas is unknown.

Another case is said to date from around 1941, shortly after the German invasion of the USSR. A "wild man" was captured somewhere in the Caucasus by a detachment of the Red Army. He appeared human, but was covered in fine, dark hair. Interrogation revealed his apparent inability (or unwillingness) to speak, and the unfortunate creature is said to have been shot as a German spy. There are various versions of this legend in the cryptozoological literature, and, as with other Alma reports, hard proof is absent.

Myra Shackley has speculated that the Almas are a relict population of Neanderthals. Soviet scientists speculate that the Chuchunaa represents the last surviving remnant of the Siberian paleo-asiatic aborigines that retreated to the upper reaches of the Yana and Indigirka rivers. Others insist they are related to the Yeti of the Himalayas, being closer to apes than to humans. The locals, for their part, often see no appreciable difference between Almas and humans, regarding them simply as "wild men" who remain untouched by civilisation. Another explanation is that human-like cryptids are humans with congenital disorders and/or mental retardation and ejected from society.