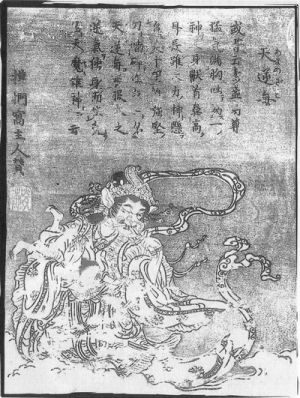 Amanozako (天逆毎, "heaven opposing everything", or 天狗神, "tengu deity") is a monstrous goddess in Japanese mythology.

Amanozako is mentioned in the Kujiki, an ancient Japanese text, which states that she originated when Susanoo let his own ferocious spirit build up inside him until he vomited her out.

Amanozako has a voracious head with a long nose, long ears, and great fangs so strong they can chew metal blades ragged; she can fly for thousands of miles at a go. The Wakan Sansai Zue describes this deity as having a furious temper.