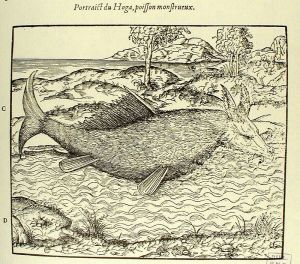 The hoga - illustration from On Monsters and Marvels by Ambroise Pare

The hoga or andura is an aquatic monster in the traditions and folklore of Mexico.

The Hoga is described as being like a gigantic fish creature, with a head and ears like those of a pig, and extremely long barbs or thick whiskers round its mouth in which were great fangs. This creature amazingly had the ability to change color and could be red, green or yellow.

The Hoga was said to inhabit the lake of the city of Themistitan, where it grazed on the leaves of the Hoga tree at the shoreline.

Humans were afraid of the Hoga since it was reported to take vast fish and even land animals if they strayed too close to the water's edge.

In the huge, deep, fresh water lake – on which the large city of Themistitan, in the Kingdom of Mexico, is built on pilings, like Venice – is found a fish as big as a sea-calf. The savages of the Antarctic call it Andura; the barbarians of the country and the Spaniards – who have made themselves masters of this place by conquests of their new lands – call it Hoga. Its head and ears are not different from a terrestrial swine; it has five whiskers a half-a foot long or thereabouts, similar to those of a big barbell; its flesh is very good and delicious. This fish produces live offspring, in the fashion of a whale. If you contemplate it while it is disporting itself swimming in the water, you would say that it is now green, now yellow, and then, red, just like the chameleon; it keeps more to the edge of the lake than elsewhere, where it feeds on leaves of a tree called Hoga, from which it took its name. It is very toothy and savage, killing and devouring other fish, indeed [those] bigger than it is; that is why people pursue it, hunt it and kill it, because if it entered into the conduits it wouldn’t leave a single one of them alive; whereby the person who kills the most of them is most welcome. From the book On Monsters and Marvels by Ambroise Pare (1510-1590), chapter 22, volume 2.