In Biblical tradition, an archdemon is a spiritual entity, prominent in the infernal hierarchy, each having an archangel as counterpart. 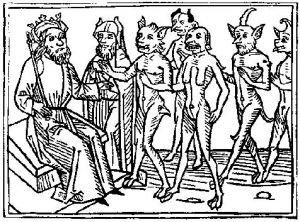 Archdemons are described as the leaders of demonic hosts, just as archangels lead choirs of angels. Ars Goetia and other notorious grimoires detail the ranks, titles, missions of each archdemon as well as the creatures they command.

In the Occult tradition, there is controversy regarding which demons should be classed as archdemons. During different ages, some demons were historically 'promoted' to archdemons, others were completely forgotten, and new ones were created. In ancient Jewish lore, pagan gods of neighbouring cultures were classed as extremely pernicious in order to protect Jews from worshiping them; therefore, Baal and Astarte were among the worst enemies of God. During the middle ages these characterizations were no longer important, but still persisted. New ones emerged, mostly revolving around Satan and the Antichrist.