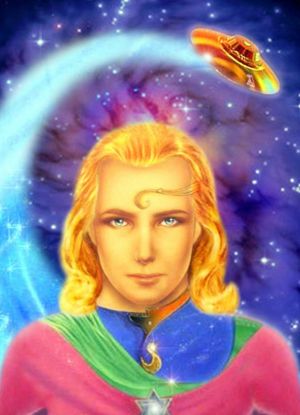 Ashtar is the name of a purported extraterrestrial being, who was channeled by various mediums.

Ashtar is believed to be the high commander of a massive flying saucer fleet called the Ashtar Galactic Command that operates near Earth (crewed mostly by Nordic alien Venusians), and reports to a benevolent extraterrestrial authority, which claimed to closely monitor activities on Earth and offered material and spiritual support to its citizens.

Ashtar was first channeled by early UFO contactee George Van Tassel, on 18 July 1952. He pretended to have established a new form of telepathic communication with extraterrestrial intelligences with the use of an allegedly advanced form of alien technology. Van Tassel maintained that the method he utilized was not a "paranormal" or "metaphysical" activity, but rather an example of the application of an allegedly advanced extraterrestrial science, that anyone could implement with the proper training. Van Tassel's early purported messages from Ashtar contained apocalyptic material, with regard to the soon to be tested hydrogen bomb. Van Tassel also claimed that Ashtar had provided specific messages that he was expected to pass on to the U.S. federal government regarding the potential negative impacts of the proposed upcoming bomb tests.

By 1955, a few well known channelers of the era, including Elouise Moeller, had incorporated the concept of an Ashtar Command and related ideas, as key components of their own developing systems. Several channelers, including Van Tassel himself, began publishing accounts which described predictions of the imminent arrival of an Ashtar-led UFO armada on earth, in order to guide and protect mankind. Several dozen channelers were simultaneously claiming to be obtaining, in some cases, competing authoritative messages directly from Ashtar. The overall movement lost credibility and popularity because of infighting.

The concept of an Ashtar Command was revitalized by a channeler named Thelma B. Terrill, (best known as "Tuella") who channeled messages and wrote a series of books on the subject in the 1970s and 1980s. Despite Tuella's influences, several channelers maintained a separate more UFO-based cosmology, which insisted on the importance of messages from Ashtar containing predictions of the imminent destruction of earth, and the need for a literal physical evacuation of the planet, with the assistance of the spacecraft of Ashtar Command. By the 1990s the movement began to splinter into factions once again. Despite these failures, by the mid-1990s, and continuing to present,[2] several of these channeling groups began to utilize the Internet in order to promulgate their beliefs and to attempt to encourage a movement toward unifying the movement and establishing a single 'authoritative' source for all Ashtar messages.