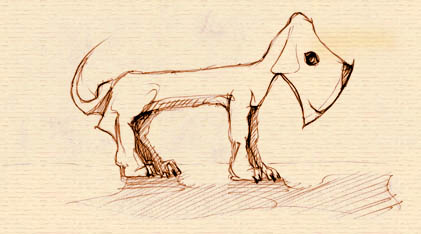 The Axehandle Hound (sometimes spelled axhandle hound, ax-handle hound, or other similar variants), is an American folklore creature with origins in lumberjack culture, specifically the lumber camps of Minnesota and Wisconsin. It is part of a group of similar folklore creatures known collectively as Fearsome Critters.

The Axehandle Hound resembles a dog with a roughly axelike shape. Its head is shaped like an axe blade, while its body, carried on short stubby legs, resembles an axe handle. It eats axe handles which have been left unattended.

Similarly to folklore such as Paul Bunyan, the person relating the story of the axehandle hound rarely indicates that it is something the storyteller actually believes in, and most listeners (except perhaps the very young) understand that they are hearing a tall tale. The axehandle hound is similar to the gremlin, in that it provides a non-serious scapegoat to blame when an axe is broken or missing. It also becomes a gentle reminder not to leave axes unattended outside at night, for obvious safety and economy reasons.

In Borges' Book of Imaginary Beings

A description of the axehandle hound can be found in Jorge Luis Borges' Book of Imaginary Beings, in a chapter entitled "Fauna of the United States". Borges gives the origin of the axehandle hound as the lumberjack camps in Minnesota or Wisconsin, and places it among similar animals which, in his words, "no one, surely, has ever believed in."