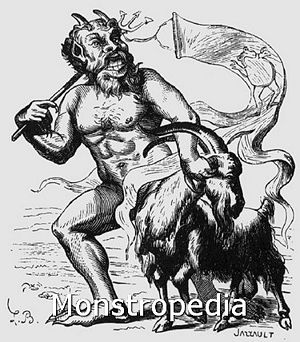 According to the Book of Enoch, Azazel was a grigori (also known as "watchers"), a group of fallen angels who mated with mortal women, giving rise to a race of hybrids known as the Nephilim.

The word's first appearances are in Leviticus 16, when in the ritual for Yom Kippur the scapegoat is to be taken to Azazel and cast into the wilderness, but this text by itself is unclear as to the actual identity of Azazel.

The Talmud (Yoma 67b) and later commentators maintain Azazel was the name of the precipitous cliff where the goat met its end. This version is cited by Biblical commentator Rashi and it is considered the plain meaning by the Jewish commentators.

In Modern Hebrew, "Azazel" has been improperly given the meaning of hell by imprecise speakers; Hell, more accurately, is known as "Gehinnom" or "Sheol".

Azazel is particularly noteworthy among the grigori because it was he who taught men how to make weapons of war as well as teaching women how to make and wear cosmetics. Eventually, Azazel's teachings created such iniquity that God decided to destroy all life on Earth with a great flood, sparing only Noah, Noah's family, and seven pairs of each species of "clean" animals, and one pair of each "unclean" species, all of whom escaped destruction by living for forty days and forty nights on an Noah's Ark that God instructed Noah to build.

The first appearance of the name "Azazel" is in Leviticus 16:8, when the Lord orders the high priest Aaron to "place lots upon the 2 goats, one marked for the Lord and the other marked for Azazel" on the Jewish Yom Kippur (Day of Atonement). The goat designated by lot for the Lord is to be used as a sin offering, while the goat designated for Azazel "shall be left standing alive before the Lord, to make expiation with it and to send it off to the wilderness to Azazel" (Lev. 16:10). Aaron was to "lay both his hands upon the head of the live goat and confess over it all the iniquities and transgressions of the Israelites, whatever their sins, putting them on the head of the goat; and it shall be sent off to the wilderness by someone designated for the task. Thus the goat shall carry on it all their iniquities to an inaccessible region; and the goat shall be set free in the wilderness" (Lev. 16:21-22). Leviticus also says that "He who set the goat for Azazel free shall wash his clothes and bathe his body in water; after that he may reenter the camp" (16:26).

While this passage does not make clear what Azazel was, some traditions hold that the Azazel of Leviticus was a demon. Scholars from these traditions disagree as to whether Azazel is a name of a fallen angel mentioned in the Book of Enoch or if it's simply another name for Satan; some historical scholarship finds that Azazel as another demon is somewhat more likely. Furthermore Leviticus mentions that Azazel is located in the wilderness, a traditional haunt for demons and unclean beasts. According to the Book of Enoch, Azazel is bound in the wilderness, but the Book of Job does not have Satan bound there (see Job 1:7 and Job 2:2, although, the ha-satan of the Book of Job is most likely different from Azazel, given that Job's ha-satan is a servant of God).

Azazel is the chief of the Se'irim, or goat-demons, who haunted the desert and to whom most primitive Semitic tribes offered sacrifices. The Old Testament states that Jeroboam appointed priests for the Se'irim. But Josiah destroyed the places of their worship, as the practices accompanying this worship involved copulation of women with goats.

The Se'irim, or hairy ones as the word itself means, are mentioned in Leviticus 17:7 and 2 Chronicles 11:15 as "goat-demons". Isaiah 34:14 says that the "goat-demons" greet each other among the ruins of Edom along with Lilith and other wild beasts. The name 'Azazel' may be derived from 'azaz' meaning 'strong' or meaning 'rugged', or 'grandeur/majesty' and 'el' meaning 'of God' or 'el' meaning 'strong.' Giving either 'strong one of God' or refer it to the rugged and rough mountain cliff from which the goat was cast down[1] Some propose that Azazel may have been derived from the Canaanite god, 'Asiz, who caused the sun to burn strongly. It has also been theorized that he has been influenced by the Egyptian god, Set.

Azazel in the Book of Enoch

The Book Of Enoch is a collection of information that most scholars divide into 5 sections. In the first book or section called The Book Of Watchers Azazel is listed in Chapter 2 - Section 8. He is described as:

"And Azâzêl taught men to make swords, and knives, and shields, and breastplates, and made known to them the metals 〈of the earth〉 and the art of working them, and bracelets, and ornaments, and the use of antimony, and the beautifying of the eyelids, and all kinds of costly stones, and all colouring tinctures. 2. And there arose much godlessness, and they committed fornication, and they were led astray, and became corrupt in all their ways."

Michael, Uriel, Raphael, and Gabriel take the cries of humanity before the Lord; Azazel is punished along with the other watchers 200 of which took human wives which gave birth to the Nephilim.

"Michael, Uriel, Raphael, and Gabriel looked down from heaven and saw much blood being shed upon the earth, and all lawlessness being wrought upon the earth" .... "And now to you, the holy ones of heaven, the souls of men make their suit, saying, "Bring our cause before the Most High." .... Thou seest what Azâzêl hath done, who hath taught all unrighteousness on earth and revealed the eternal secrets which were (preserved) in heaven, which men were striving to learn."

The punishment is described in this excerpt:

"And again the Lord said to Raphael: 'Bind Azâzêl hand and foot, and cast him into the darkness: and make an opening in the desert, which is in Dûdâêl, and cast him therein. And place upon him rough and jagged rocks, and cover him with darkness, and let him abide there for ever, and cover his face that he may not see light. And on the day of the great judgement he shall be cast into the fire. And heal the earth which the angels have corrupted, and proclaim the healing of the earth, that they may heal the plague, and that all the children of men may not perish through all the secret things that the Watchers have disclosed and have taught their sons. And the whole earth has been corrupted through the works that were taught by Azâzêl: to him ascribe all sin.'"

The story then claims that "the whole world has been corrupted through the works that were taught by Azazel; ascribe [the] sin (blame) [of the violence (see Genesis 6:5)] to him".

Azazel in the Apocalypse of Abraham

In the Apocalypse of Abraham, Azazel is portrayed as an unclean bird which came down upon the sacrifice which Abraham prepared. This is in reference to Genesis 15:11 "Birds of prey came down upon the carcasses, and Abram drove them away." "And the unclean bird spoke to me and said, 'What are you doing, Abraham, on the holy heights, where no one eats or drinks, nor is there upon them food for men. But these all will be consumed by fire and ascend to the height, they will destroy you.' And it came to pass when I saw the bird speaking I said this to the angel: 'What is this, my lord?' And he said, 'This is disgrace, this is Azazel!' And he said to him, 'Shame on you Azazel! For Abraham's portion is in heaven, and yours is on earth, for you have selected here, (and) become enamored of the dwelling place of your blemish. Therefore the Eternal Ruler, the Mighty One, has given you a dwelling on earth. Through you the all-evil spirit (is) a liar, and through you (are) wrath and trials on the generations of men who live impiously." - Apocalypse of Abraham 13:4-9 The Apocalypse of Abraham also associates Azazel with Hell. Abraham says to him "May you be the firebrand of the furnace of the earth! Go, Azazel, into the untrodden parts of the earth. For your heritage is over those who are with you" (14:5-6) There is also the idea that God's heritage (the created world) is largely under the dominion of evil. It is "shared with Azazel" (20:5) Azazel is also identified with the serpent which tempted Eve. His form is described as a dragon with "hands and feet like a man's, on his back six wings on the right and six on the left." (23:7)

Finally, the Apocalypse of Abraham says that the wicked will "putrefy in the belly of the crafty worm Azazel, and be burned by the fire of Azazel's tongue." (31:5) Here again, there is another reference to Azazel as being Hell.

Azazel is also known as Azazil in Arabic. He became known as Iblis (meaning "despair" or "the despaired"), the Deceiver, when he was banished from Heaven after disobeying by refusing to bow to Adam on God's command. In Islam, Azazil is the lord of all demons as Adam is king of humans.

According to some, Azazel is merely a synonym word for Hell. Others say that he was a mighty cherub and that he is the principal standard-bearer of the infernal armies. Often said to be one of the world's first evils, he is commonly placed high in Hell's hierarchy. Some use Azazel as a synonym of Satan, but others are of the opinion that they are separate entities, though many agree that Satan's traditional satyr-like appearance is most likely originally based on Azazel, since Azazel was often said to appear similar to that of Eliphas Lévi's depiction of Baphomet, as that of a goat with human disposition, often with a pair of leathery wings.

Some also identify Azazel with The Beast or as The Dragon from Revelation.

Azazel is the guardian of goats. On the 10th day of September, on the feast of the Expiation, it was Jewish custom to draw lots for two goats: one for the Lord and the other for Azazel. The goat for the Lord was then sacrificed and its blood served as atonement. With the goat for Azazel, the high priest would place both of his hands on the goat's head and confess both his sins and the sins of the people. The goat ("scapegoat") was then led into the desert and set free. Azazel then returned the goat. Milton described Azazel as the first gate-teacher of the infernal armies. Azazel is also the name of the demon that serves Mark the heretic.

Part of this article consists of modified text from Wikipedia, and the article is therefore licensed under GFDL.
Retrieved from "https://www.monstropedia.org/index.php?title=Azazel&oldid=13653"
Categories: