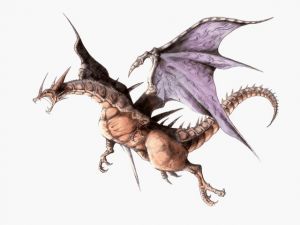 Bahamut (بهموت} is a giant omnipotent creature in Arabian mythology, sometimes describes as a dragon or snake.

Bahamut rides on a giant whale creature called Liwash that resides in a vast sea, the Adwad. He supports a huge bull named Kuyutha who supports a rock of ruby, atop which stands an angel who supports the seven heavens. Later, Bahamut was identified with Liwash and became a huge fish hence the biblical tradition.

In the Final Fantasy series, Bahamut is a summon in almost every game and is depicted as a large dragon. More often than not, Bahamut's chief attack is "Mega Flare", dealing massive non-elemental damage to enemies.