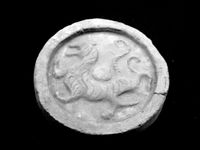 Ancient Chinese paintings extracted from imperial archives depict a serpentine and erect-eared creature of sinous curves and black stripes that flow across a pelt white as snow. With its somewhat equine head and protruding teeth, the more ignorant might easily be tempted into pronouncing it a Quilin, the Chinese retelling of the universal unicorn legend. But they would be very mistaken. Despite the striking resemblance it might seem to share with the latter to their unlearnered eyes, this is no placid herbivore content to graze on flora, but the fabled White Tiger of the West, awing all with his regal ferocity and majesty.

One of the four primordial spirit beasts spoken of in the Annals of Yueh that have been appointed to guard the four corners of the great sky quadrant which encompasses both heaven and earth and serve Lord Taishakuten who resides in the very centre of the quadrant itself, he is steward of the West, residing in the seven star constellations to be found there. Lord of the forest, master of Autumn and dominant over iron and all the other metals employed in the forging of weapons, he epitomizes the very spirit of the righteous warrior. As presiding power of the forest and mountains, he rules unquestioned over the beasts and animals that dwell there, making him the universally acknowledged monarch and champion of all beasts. Dependent as well on his protection, are the deceased emperors who must entrust the outcome of their dangerous accension to the after-life to his awesome might and prowess. It was custom whenever an emperor was laid to rest in his royal tomb for a piece of iron to be laid by his side. Acting as a beacon to the energies of the Baihu, it would draw forth the great White Tiger, calling on him stand guard over the dead emperor's final resting place. Thus would the divine beast appear on the earthly plane, crouched over the tomb of the fallen king, ever ready to slay with his fearsome fangs and claws any rapacious demon of the netherworld audacious enough to seek to feast on the soul of the one that lay interred.

Cementing his reputation as a power to be reckoned with, was the fact that the emperor's generals would often call upon his strength in war. Adorning their wrists were braclets crafted from the sacred white jade used in the worship of the Baihu, these adornments of tiger jade would bear inscriptions of the White Tiger, proclaiming theie wearers as the commanders of the imperial armies. Under the conquering banner of the Baihu, they would charge into battle, invoking him to grant them victory over their foes.

He represents the region of the dead, the forest, the season of Autumn and the virture of righteousness.