In demonology, Balam (also Balaam, Balan) is a great and powerful king of Hell. 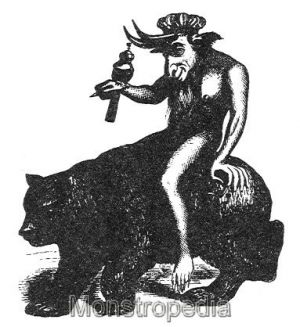 His name seems to have been taken from Balaam, the Biblical magician.

Balam is a King (to some authors a duke) who commands over forty legions of demons. He was once an angel of the Order of Dominations. .

Balam is depicted as a three-headed creature with a serpent's tail and eyes that shoot fire. One head is the head of a bull, the second of a man, and the third of a ram. He carries a hawk on his fist and rides a strong bear. At other times he is represented as a naked man riding a bear. His voice is hoarse and harsh.

One of the 72 spirits of Salomon. He answers questions concerning past, present and future events, and he is willing to reveal the secret of invisibility. He is an excellent teacher of the subtle art of cunning, and he imparts wit and finesse to whoever queries him on these matter.

Balam is a great and a terrible king, he commeth foorth with three heads, the first of a bull, the second of a man, the third of a ram, he hath a serpents taile, and flaming eies, riding upon a furious beare, and carrieng a hawke on his fist, he speaketh with a hoarse voice, answering perfectlie of things present, past, and to come, hee maketh a man invisible and wise, hee governeth fourtie legions, and was of the order of dominations. Pseudomonarchia daemonum - Johann Wier (1583)

The Fifty-first Spirit is Balam or Balaam. He is a Terrible, Great, and Powerful King. He appeareth with three Heads: the first is like that of a Bull; the second is like that of a Man; the third is like that of a Ram. He hath the Tail of a Serpent, and Flaming Eyes. He rideth upon a furious Bear, and carrieth a Boshawk upon his Fist. He speaketh with a hoarse Voice, giving True Answers of Things Past, Present, and to Come. He maketh men to go Invisible, and also to be Witty. He governeth 40 Legions of Spirits. His Seal is this, etc. Goetia - S. L. MacGregor Mathers (1904)