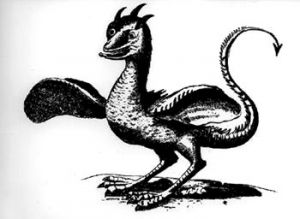 The basilisk, also known as a cockatrice or king of the serpents, is a fabulous beast which has been depicted as the most dangerous serpent that ever existed on Earth.

The basilisk is fabulously alleged to be hatched by a cockerel from the egg of a serpent (the reverse of the cockatrice, which is hatched from a hen's egg incubated by a serpent's nest).

Old tales describe it as being born from a spherical, yolkless egg, laid during the days of Sirius (the Dog Star) by a seven-year-old rooster and hatched by a toad.

The word "basilisk" comes from the Greek basileus, which means king. The basilisk was the king of the snakes and the most poisonous creature on earth.

The basilisk's appearance has always been a matter of dispute since there is no way to see a basilisk and survive. Looking at it, according to legend, brings death. The basilisk was depicted in a few illuminated manuscripts in the Middle Ages but appeared much more often as an ornamental detail in church architecture, adorning capitals and medallions. The best representation of the basilisk is found in the decorative field of heraldry where the basilisk had the head and legs of a cock, a snake-like tail, and a body like a bird’s. It seems that the wings could be depicted as either being covered with feathers or scales. In this form the creature was sometimes referred to as a basilicok' or cockatrice.

The antique Romans called it "regulus" or little king, not only because of its crown, but because it terrorized all other creatures with his deadly look and poison. Its color was either a greenish black or yellow, sometimes with a kind of blackish hue. Plinius mentioned a white spot on its head, which could be misinterpreted as a diadem or a crown. Others speak of three spikes on its forehead.

During the first century AD, many travelers crossing the deserts of North Africa used to take with them cockerels as a protection against Basilisk. Strangely, a new type of basilisk appeared which had the head of a rooster instead of that of a reptile. It was first called a Basilicok and later a cockatrice or cockatrix. Its birth is very curious. It has to be born from a shell-less egg, which is laid by a seven-old-year cock during the period when Sirius the Dog Star can be seen in the sky. A toad or snake on a dung heap must then hatch the spherical egg. The cockatrice that emerges from the egg has eyes that resemble those of a toad but still retains the basilisk's mortal stare. To the medieval Christians it represented sin and sudden death.

It is a native of the province of Cyrenaica, not more than 12 inches long, and adorned with a bright white marking on the head like a sort of diadem. It routs all snakes with its hiss, and does not move its body forward in manifold coils like the other snakes but advances with its middle raised high. It kills bushes not only by its touch but also by its breath, which scorches up grass and bursts rocks. Its effect on other animals is disastrous: it is believed that once one was killed with a spear by a man on horseback and the infection rising through the spear fatally poisoned not only the rider but also the horse.

Those who went to hunt the basilisk took with them a mirror, which reflected back the deadly glare upon its author, and by a kind of poetical justice slew the basilisk with his own weapon. According to some tales, the crowing of a cock can also kill a basilisk. This weakness also affects other monsters like faeries, ghosts or vampires that are supposed to appear in the night and disappear at the first light.

Weasels can bite basilisks to death, or their smell is fatal to the serpents. Men put them into the caves where the basilisks lie hidden. The basilisk might look daggers; the weasel cared not, but advanced boldly to the conflict. When bitten, the weasel retired for a moment to eat some rue, which was the only plant the basilisks could not wither, returned with renewed strength and soundness to the charge, and never left the enemy till he was stretched dead on the plain.

Most authors agree that Africa was the basilisk's homeland. The basilisk is always found in a desert. This is not because it enjoyed living there, but because its breath and sight were so destructive that it turned any landscape into a sandy desert.

The basilisk was of some use after death. Thus we read that its carcass was suspended in the temple of Apollo, and in private houses, as a sovereign remedy against spiders, and that it was also hung up in the temple of Diana, for which reason no swallow ever dared enter the sacred place. It was also said in antiquity that silver rubbed with the ashes of a dead basilisk would make the silver take on the appearance of gold. These protoscientific uses of the basilisk persist in the medieval bestiaries and the latter attribute became quite popular in the alchemical tracts of the Renaissance.

In 1587 a basilisk killed three persons in Warsaw (Poland). Playing hide-and-seek two children, a boy and a girl, both five years old, intended to hide in an old cellar, which had been abandoned for 30 years. When they reached the lowest step they suddenly fell dead on the floor. They were not found before the evening, when their mothers missed them. A servant was sent out in search. She really found them, but when she went down into the cellar to waken the apparently sleeping children she was herself struck by death. However, an old woman had noticed her entering the abandoned building. She found them all three lying on the ground. All her shouting remained unanswered. Neighbours came and recovered the corpses with long clasps. The bodies were swollen, and so were their lips and tongues. Their skin had turned to yellow. From these signs some learned persons guessed, that a serpent or rather a basilisk had caused their deaths.

A poor sinner was found who had been sentenced to death. He was clad in leather clothes draped with mirrors. His eyes were protected by strong glasses. With a candle in one hand and pincers in the other he went down the vault. There after half an hour search he found a strange creature of the size of a cock sitting in a crevasse of the wall. It was at once killed when it saw its own image reflected by the mirrors. The man took it with the pincers and brought it up to bright daylight. It was identified as a basilisk with the head of an Indian cock but the eyes of a toad. Its body and wings were colored with yellow, blue, red, and green specks. The long, yellow feet were that of a rooster, but its curved tail resembled that of a snake.

An Italian nobleman was killed by a basilisk when he went hunting. For a long time his dog had barked at a heap of stones when his master tried to find out what frightened his dog. He found a winged serpent. When he tried to kill it, the serpent spread the wings and blew poisonous breath into his face. At once he fell to the ground and lived just long enough to tell his companions what he had seen.

The basilisk originated from the horned adder or hooded cobra from India. Plainly described simply as a snake with a golden crown. By the Middle Ages, it had become a snake with the head of a cock, and sometimes with the head of a human. Geoffrey Chaucer featured a basilicok (as he called it) in his Canterbury Tales. In art, the basilisk symbolized the Devil and the Antichrist. To the Protestants, it was a symbol of the papacy.

Some have speculated a Euhemerus explanation for the basilisk, in particular that reports of cobras may have given birth to the stories of the monster. The king cobra or Hammadryad has a crownlike symbol on its head and, as with many snakes in overlapping territories is often killed by mongooses. Another family of eleven species of cobras can incapacitate by spitting venom, and may well have been confused by similar appearance with the Hammadryad. The Egyptian cobra lives in the desert and was used as a symbol of royalty.

There is in fact a small lizard called the Common Basilisk (Basiliscus basiliscus), though it shares none of the attributes of the legendary creature, save a frill resembling a crown.

It is almost always an icon of fear. In alchemical writings the basilisk played many roles. Sometimes it would fall into the realm of the fabulous salamander where it would be used to symbolize the destructive fire that preceded the transmutation of metals. In other works, the elixir, or Philosopher’s Stone, a potent and mysterious catalyst that was said to turn whatever it touched to gold, cure all ills, and confer eternal life was called the basilisk or cockatrice. During the Renaissance, Christianity rediscovered the creature in the context of the Old Testament and used it sparsely as an emblem of the devil and sin.

Basilisks have been reimagined and employed in modern fantasy fiction for books, movies, and role-playing games.