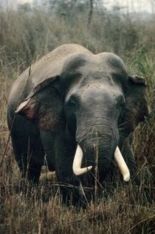 Raja Gaj, the beast of Bardia.

The beast of Bardia or Raja Ga is a huge elephant rumored to live in the forest of Bardia in Nepal.

The giant elephants of West Nepal were a legend until in 1992 a Scientific Exploration Society expedition discovered two of these enormous beasts living in the Bardia Park in a remote corner of this Himalayan kingdom. The largest tusker, estimated at 11 feet 3 inches at his shoulder and probably weighing up to 8 tons, was named Raja Ga or King Elephant.

With his great domed head and massive body it led the local villagers to believe that they had a mammoth in their midst. However research by eminent zoologist Prof Adrian Lister, who extracted DNA from his dung, showed that he was a type of Asian elephant. His unusual shape may have been due to isolation or perhaps a connection with a prehistoric elephant named a Stegodon. A fossil skull of one of these ancient creatures had been discovered by a German palaeontologist in East Nepal. For ten years Colonel John Blashford-Snell (JBS) and SES teams studied Raja Gaj and found a herd of up to 50 including cows and calves.

Shown to be the largest known Asian elephant Raja Gaj was a prize to be protected and thus the Nepalese Wildlife Department and the Army guarded Bardia. This in turn led to the conservation of both the Bengal Tiger and the One Horned Indian Rhino in the Park. Tourists poured in and the area prospered, but then came the Maoist revolution and from 2002 the poachers began to attack the wildlife. However the Wildlife Department and the Nepalese Army managed to protect some of the creatures and today there are over 600 troops guarding Bardia. But Raja Gaj has not been seen since 2008 and villagers have reported that a large elephant was swept down the Karnali river by a sudden flood. Nevertheless some believe he is still alive.

In January JBS and a team of enthusiasts from the SES returned to Bardia to seek evidence that the King Elephant, who would now be about 64, is there. On 1st March they set up camp beside the Karnali and using six trained female domestic elephants and expert Nepalese trackers from the Tiger Mountain Company, they searched the jungle and high grass areas of the valley. With their mounts forcing their way like living tanks through the dense foliage the expedition saw many animals and birds. They had exciting encounters with the impressive Bengal tiger and prehistoric looking rhinoceros. After several days searching they spotted a large wild bull elephant feeding near the river and cautiously approached him. When they were a hundred yards away the tusker threw up dust and dashed into the bush. The team followed and suddenly their quarry reappeared. His huge domed head and gleaming tusks broke through the cover and hurling up clouds of dust he came after them. Emerging from the jungle he pressed forward scenting the tame female elephants. Then suddenly he seemed to loose interest and tramped back into the trees. “I believe this behaviour may be due to his short sight” said JBS. “He has to come close to see who we are and once this is determined he may decide we are no threat and continue with his lunch, but one needs a steady nerve to stand and let the tusker approach”. The new bull looks very like Raja Gaj and behaves similarly. He has been named Rajim – son of Raja Gaj.

Later a second large bull elephant was discovered who behaved in a similar way and once gave a demonstration of his strength by charging a tree and knocking it down. “Like all men, just showing off” said Dr Tessa Donovan-Beermann who was helping JBS to control the search with a Motorola walkie-talkie radio.

Phyllis Angliss organised some aid for the villagers in the area around the Bardia Park, giving out material to schools, medical items and glasses. This was much appreciated. To encourage the local children to like elephants in a village often raided by wild ones, an elephant football match was played at a local school. The children rode the domestic elephants, but the Jumbos preferred to pick the ball up in their trunks and run with it. The game ended when one stood on the ball and burst it!

Footprints of around 18 wild elephants and their calves were also discovered in a nearby valley. Susan Hilliard, a finger print officer with the Merseyside Police who has been on many of the Bardia expeditions, spotted a set of footprints 21 inches in diameter indicating that a bull of about 10 feet 6 inches height at the shoulder is moving with the herd. Larger prints were also found indicating even taller elephants but sadly none as high as Raja Gaj.

Nevertheless the expedition’s discoveries show that the elephants of Bardia have survived the poaching during the recent conflict and the protection by the Army may well allow the wildlife to multiply. However the guardians cannot relax and as the expedition left the area the Army shot dead three local people and captured one whom they say fired on them. It is claimed these people were poaching, but as may be imagined there is uproar in the area as villagers state the victims were simply collecting traditional medicine.