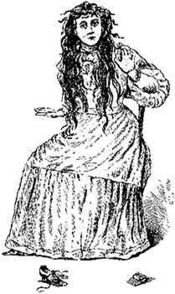 An artist's drawing of Betsy Bell, originally published in 1894.

According to the legend, the first manifestation of the haunting occurred in 1817 when John Bell, Sr. encountered a strange animal in a cornfield on his large farm in Robertson County, on the Red River, near Adams, Tennessee. The animal, described as having the body of a dog and the head of a rabbit, vanished when Bell shot at it. This incident was quickly followed by a series of strange beating and gnawing noises manifesting around the outside, and eventually inside the Bell residence that did not stop until 3 a.m. Betsy Bell, the family's younger daughter and the only daughter still living at home (Bell's oldest daughter Esther married Alexander Bennett Porter July 24, 1817 when she was 17), claimed to have been assaulted by an invisible force. 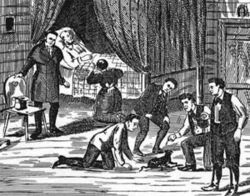 An artist's drawing of John Bell's death, originally published in 1894. In the foreground one can see a couple of men feeding the family cat with some of the unidentified liquid which was found near the body of John Bell. The cat died.

John Bell Sr., later in life, suffered frequent facial seizures, often rendering him speechless. John Bell, Sr. died on December 20, 1820. A small vial containing an unidentified liquid he had apparently been given or ingested thinking it was medicine was found near the body. When some of the contents were force-fed to the family cat, the animal died immediately; the bottle was then thrown into the fireplace. At the funeral, people could hear the Bell Witch laughing and taunting the pastor.

Pat Fitzhugh's retelling of the Bell Witch legend concludes with a statement to the effect that many people believe that the spirit returned in 1935, took up residence on the former Bell property and remained there through the present day. He notes "the faint sounds of people talking and children playing can sometimes be heard in the area" and asserts that it is "very difficult to take a good picture there." Other sources have said that 1935, the year when the witch claimed it would return ("one hundred years and seven" past 1828), brought nothing out of the ordinary to the Bell descendants living at the home who'd been anticipating some great disturbance. 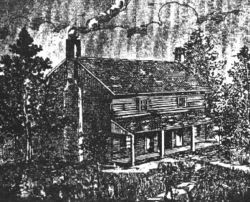 An artist's etching of the Bell home, originally published in 1894.

Part of this article consists of modified text from Wikipedia, and the article is therefore licensed under GFDL.
Retrieved from "https://www.monstropedia.org/index.php?title=Bell_Witch&oldid=12046"
Categories: