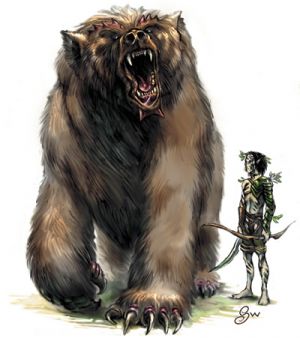 The Bergman's Bear (Ursus arctos piscator) is an alleged and probably extinct subspecies of the Brown Bear that lived in the Kamchatka Peninsula (Soviet Union).

The bear was identified and named by Swedish zoologist Sten Bergman in 1920.

Bergman determined that the bear was a separate subspecies after examining a hide (which had fur very different from other local bears) and series of footprints, measuring 14.5 x 10 inches, which he judged to be much larger than other bears on Kamchatka.

Some think that the Cold War may have helped the population to recover because the Soviet Military blocked access to the area in that time.

Interest in the bear was revitalized in the 1960s. Hunter Rodion Sivobolov reported claims by Kamchatka natives of an unusually large bear they called either the Irkuiem (roughly meaning "trousers pulled down" due to the appearance of the bear's hind legs), or the God bear due to its large size.

Based on Sivobolov's description, biologist N.K. Vereshchagin suggested that the God bear might be a relict Arctodus simus, a massive extinct bear. This idea was coolly received by the scientific community.