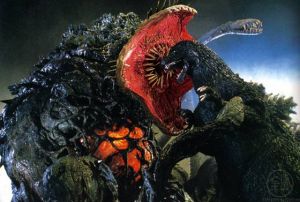 Biollante (ビオランテ, 'Biorante') is a genetic hybrid kaiju who first appeared in the 1989 Toho film Godzilla vs. Biollante.

At first, Biollante was a giant rose with teeth inside her bud and long vines. In her second form, the Godzilla genes took over and Biollante's body became an abomination of biological science. Biollante's second form had a head similar to that of a Mosasaur or crocodile and a maw with knife-like teeth, even on the interior lining of her mouth. In addition, six large tusks (three on each side of her mouth) protruded from the fulcrum-region of her mouth. Large numbers of vines and tendrils were a primary feature of Biollante. Some vines ended in sharp, spear-like ends, while others sported small, sharp-toothed mouths. In both forms, a large, fleshy sac surrounded by her overlaying vines resemble a brain.

In her rose form, Biollante can constrict and grapple with an enemy with her many tendrils and mouthed vines, each of which are capable of spitting a highly corrosive acid sap that can blind an opponent. Biollante can break apart her entire body into golden energy particles, ascend into space, and return, healing from almost anything and even changing form. Biollante's second form sports a massive jawed head with countless teeth and enormous tusks; an arched back with plate-like plant spines; and four stubby, root-like legs that Biollante utilizes as a means of locomotion. He also acquired the ability to spit large quantities of radioactive corrosive sap from her large mouth. Biollante also sports extremely enhanced regeneration capabilities, shown when she completely regenerated back the part of her head which had been blown off by Godzilla's atomic ray.

After Godzilla's return in 1984 in The Return of Godzilla, the city of Tokyo, Japan had suffered a great deal of destruction. During the aftermath and cleanup, forensic workers collected small remains of skin from Godzilla, which were later transported to a government lab facility in the arid wasteland of Saradia.

A scientist by the name of Dr. Shiragami intended to use the genetic material of the Godzilla cells in the skin to genetically enhance various species of plants to transform the land of Saradia into rich crops resistant to harsh weather and unfavorable conditions. Unfortunately, numerous other nations did not approve of this move in agricultural wealth-as Saradia relied on exports for its produce-and an act of terrorism was put into plan to bomb the laboratory working with the cells. Amongst the scientists who lost their lives was Erika Shiragami, Dr. Shiragami's daughter. His loss was graving to him, and he proceeded to collect DNA from his daughter and splice it with that of a rosebush in hopes of preserving his daughter's spiritual entity.

Five years later, in 1989, an earthquake destroyed the roses' shelter, thereby killing several. Dr. Shiragami became panicked, and carried out a risky and unauthorized plan to splice the Godzilla DNA with a lone rose, in hopes that the rose would remain alive and hopefully invincible. However, the seemingly successful fusion of the cells resulted in the slow but eventual growth and mutation of the rose, which eventually became capable of thinking and moving, and eventually proceeded to smash its way through the laboratory wall, making its way to Lake Ashino, where it rooted itself and took up residence there.

Biollante's first encounter with Godzilla failed miserably and took heavy damage from Godzilla's atomic beam. Godzilla eventually managed to set Biollante aflame as Biollante seemingly burned to death. However, we learn that Biollante is immortal and can dissolve into energy particles to ascend into space. Later on, Biollante confronted Godzilla again, this time at her own will. The outcome of the battle resulted in Godzilla retreating as Anti-Nuclear Energy Bacteria began to take effect, slowly weakening him. He clumsily lumbered to the coast, collapsing into the sea face first, laying apparently unconscious.

Biollante, on the other hand, had also suffered a devastating blow when Godzilla fired a blast of his beam directly into Biollante's throat, blowing out her back. She was forced to retreat as well, and dissolved into spores again and ascended into space, likely never to be seen again. Shortly after, Godzilla regained strength from the cooling waters of the ocean (which stopped the breeding of the bacteria) and headed out to sea to recuperate.

Through the years up until 1994, stray particles of Biollante's DNA would become lost in space, eventually going through a complex process of galactic mutation, resulting in the creation of one of Godzilla's toughest foes, Spacegodzilla.