Anonymous
×
Revision as of 09:32, 18 May 2012 by Admin (talk | contribs) (Created page with "thumb|Voodoo Bizango Statues '''Bizango''' is the name given both to secret Voodoo societies in Haiti and the artefacts that are associated to them. ==Hist...")
(diff) ← Older revision | Latest revision (diff) | Newer revision → (diff) 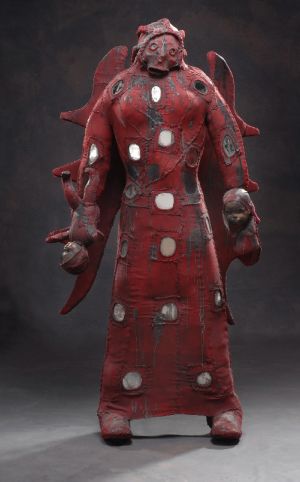 Bizango is the name given both to secret Voodoo societies in Haiti and the artefacts that are associated to them.

From 1791 to 1804, the secret societies played a key role in the slaves' resistance against the French. With their rigid structure and military organization, these societies were perfectly suited to the maroon communities. Their members pledge themselves to fight and wage war. In the 20th century, the dictators François Papa Doc and Jean-Claude Baby Doc Duvalier used secret societies to silence critics of their regime. These societies, of which the Bizango is one of the most important, still exist today.

With their terrifying appearance, the statues seek to preserve the memory of the slave uprising that took place at the time when these societies were first formed. Their heads are actual human skulls modeled with clay. Ropes and chains harness the powers that they possess. Fragments of mirrors in the eye sockets and on their clothes refer to the world of spirits and offer protection against evil powers.