Black Annis is a Scottish/English legendary blue-faced hag who lives in a cave in the Dane Hills, Leicestershire. 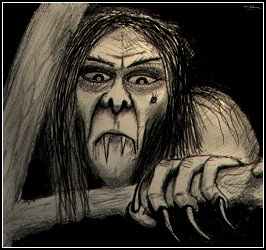 She has one eye, wrinkled bluish skin and is immensely strong, with long claws and sharp white teeth.

From her hiding place, she preys on unsuspecting passers-by, leaping out and tearing them apart, disembowelling them and gorging herself on their flesh. She is said to be especially fond of children, at least in her dietary preferences, and her habit when she does catch one is to flay the unfortunate victim alive before beginning her feast. She would also reach inside houses to snatch people, which was the professed reason why houses in that area had small windows. Shepherds attributed to her the loss of lambs, and mothers their loss of children. According to a local writer, the children of a past generation "who went to run on Dane Hills were assured that Black Anna lay in wait there to snatch them away to her 'bower'."

Legend has it that she used her iron claws to dig into the side of a sandstone cliff, making herself a home there which is known as Black Annis's Bower. Her cave was said to be decorated with the skins of her prey, a grisly trophy room whose floor is littered with bones. Over the cave grew an oak-tree, in the branches of which the bag was wont to conceal herself so that she might pounce out unawares and seize human victims, especially children.

According to the legend, the cave she dwelt in at Dane Hills but it has long ago been hidden from view. By the late 19th century, it was filled with earth, and a housing estate was built in the 1920s. It was said to have measured 5 feet by 8 (1.5 metres by 2.5), with ledges running along the sides, leading to a tunnel, which connected the cave to Leicester Castle or Leicester Cathedral. Every year on Easter Monday, it was customary to hold a drag hunt from her cave to the Mayor's house. The bait was a dead cat drenched in aniseed.

A local poet has immortalized the hag and her cave:

An oak, the pride of all the mossy dell,
Spreads its broad arms above the stony cell;
And many a bush, with hostile thorns arrayed,
Forbids the secret cavern to invade.

Where down the plain the winding pathway falls,
From Glen-field vill, to Lester's ancient walls;
Nature, or art, with imitative power,
Far in the Glenn has plac'd Black Annis's Bower.
'Tis said the soul of mortal man recoil'd
To view Black Annis's eye, so fierce and wild;
Vast talons, foul with human flesh, there grew
In place of hands, and her features livid blue,
Glar'd in her visage; whilst her obscene waist
Warm skins of human victims embrac'd.