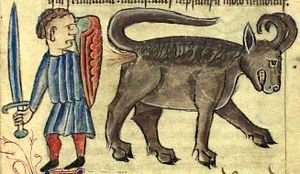 The Bonnacon (also called the Bonacon or the Bonasus) is a mythology creature from Asia.

The Bonnacon is often described as being a large four-legged dragon-like creature with turned-back horns and thick armour. It produces the same burning waste from its rear Pliny reported, along with similarly caustic breath, so that neither end is safe. The Bonnacon is also mentioned in The Aberdeen Bestiary. [1]

The animal was described by Pliny in his Naturalis Historia

There are reports of a wild animal in Paionia called the Wisent, which has the mane of a horse, but in all other respects resembles a bull; its horns are curved back in such a manner as to be of no use for fighting, and it is said that because of this it saves itself by running away, meanwhile emitting a trail of dung that sometimes covers a distance of as much as three furlongs 604 m, contact with which scorches pursuers like a sort of fire." - Book 8, 16

The Bonnacon has curled horns and emits burning dung. The legend may be based on a type of bison in reality.