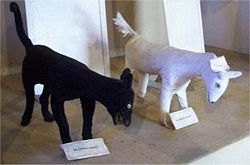 The cadejo (IPA pronunication /ka.ðe.xo/) is a monstrous dog from Central America folklore.

In popular etymology, the name cadejo is thought to have derived from the Spanish word "cadena", meaning "chain"; the cadejo is at times represented as dragging a chain behind him. There is a fairly large member of the weasel family, the tayra, which in common speech is called a cadejo and is cited as a possible source of the legend.

Cadejo usually appear in the form of a large (up to the size of a cow), shaggy dog with burning red eyes and a goat's hooves, although in some areas they have more bull-like characteristics. When the cadejo is near, it is said to bring about a strong goat-like smell.

There is a good, white cadejo and an evil, black cadejo. Both are spirits that appear at night to travellers: the white to protect them from harm during their journey, the black (sometimes an incarnation of the devil), to kill them.

The black cadejo ranges in many sizes according to different tales in various regions. It lurks in graveyards and dark alleys, waiting to attack a passing victim. It has a distinctive smell of concentrated urine and burning sulphur. It rattles with a jerking motion contracting its pharynx. Its gaze freezes anyone who makes eye contact. It glitters in the pitch dark with skin and short hair, similar to that of a pig.

There are three types of black cadejos:

According to the stories, many have tried to kill the black cadejo but have failed and perished. Also it is said that if a cadejo is killed, it will smell terrible for several days, and then its body will disappear. Some Guatemalan folklore also tells of a cadejo that guards drunks against anyone who tries to rob or hurt them. Most people say never to turn your back to the creature because otherwise you will go crazy.

A fairly popular version of the legend in El Salvador talks about two brothers who walk into the house of a black magician. During a storm, he asks the boys to help him with some logs for a fire. Both boys slack on the job but eat the man's food. Once he finds out the little bit of food he had is missing and that there is not enough wood for his fire, he puts a curse on the road that leads to the boy's village. Voices bother the boys and when they turn their backs on the voices they get turned into creatures: a white Cadejo and a black one. After going back to their village in their cursed form they get kicked out and have no choice but to wander.