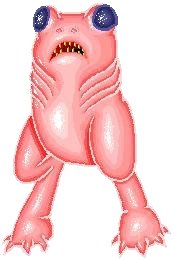 The Canvey Island Monster is the name given to an unusual creature whose carcass washed up on the shores of Canvey Island, England, in November, 1954. A second, more intact, carcass was discovered in August, 1955.

The 1954 specimen was described as being 76cm (2.4ft) long with thick reddish brown skin, bulging eyes and gills. It was also described as having hind legs with five-toed horseshoe-shaped feet with concave arches - which appeared to be suited for bipedal locomotion - but no forelimbs. Its remains were cremated after a cursory inspection by zoologists who said that it posed no danger to the public. The 1955 specimen was described as being similar to the first but much larger, being 120cm (3.9 ft) long and weighing approximately 11.3kg (25lb). It was sufficiently fresh for its eyes, nostrils and teeth to be studied though no official explanation was given at the time as to what it was or what happened to the carcass.

In November, 1954, several residents on Canvey Island in the UK found the most unusual corpse they had ever seen washed up on the shore. They dragged the body up onto the shore and ran to tell the authorities who brought in two zoologists to study the body. After examination the zoologists cremated the body and assured the public that there was nothing out of the ordinary. The authorities made no more mention of it.

That was until August 1955, when Reverend Joseph Overs found another dead creature floating in a tide pool. This body was described to be in much better condition, this specimen was much larger being about 1.2m (4ft), weighed about 11.3kg (25lb). The better condition of the body allowed for details of the face to be studied such as the eyes, nostrils and teeth, and it also possessed very prominent gills. However, there is no mention anywhere of what happened to this body, and no more specimens have been officially examined. The Canvey Island carcasses were first reported by Frank Edwards in his 'Stranger than Science' in 1959, and have since been extensively reported.

In 1999, Fortean journalist Nicholas Warren carried out an investigation into the 1954-55 sightings. He was unable to locate any official records at the Plymouth Marine Biology Association Laboratory or the National Rivers Authority identifying the creature as being a known or unknown specimen, but was able to find accounts from locals who believed the creature was an anglerfish.

This determination was later seconded by Alwyne Wheeler, former ichthyologist for the Department of Zoology at the British Natural History Museum, who put forward that the creature was an anglerfish whose pronounced fins had been incorrectly described as being hind legs. Further research on the situation, however, has pointed to another new possibility that the creature may have been an Ogcocephalidae or Batfish (being that this species of Angler already possess leg-like fins towards their short tails). It is shown that Batfish tend to also have reddish colored skin, bearing a close resemblance to the "thick reddish brown skin" of the creature. Researchers have come to the opinion, therefore, that the Canvey Island Monster was merely an instance of misidentification, of a rarely seen fish.

Part of this article consists of modified text from Wikipedia, and the article is therefore licensed under GFDL.
Retrieved from "https://www.monstropedia.org/index.php?title=Canvey_Island_Monster&oldid=11968"
Categories: