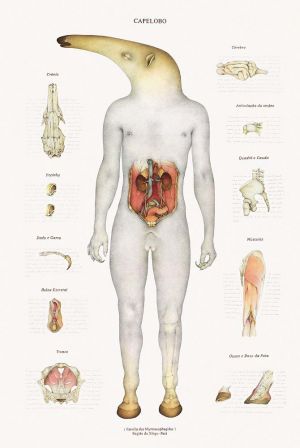 Capé-lobo or capelobo is a hybrid bipedal cryptid from the area of Para and Maranhao in North Brazil.

"Wolf's cape is said to derive from an old Indian who leaves his village to live his last days alone in the forest. Instead of dying, however, he gradually transforms into a foul-smelling hairy ape armed with longs, canine fangs and a single eye protuding from his forehead. The terrestrial creature walks upright and leaves rounded footprints in the soil, similar to those left if one presses the bottom of a bottle into the ground."

Capelobo is carnivorous and nocturnal. It attacks newborn cats and dogs, but may attack larger prey and humans, breaking their skulls and eating the brain or drinking the victim's blood