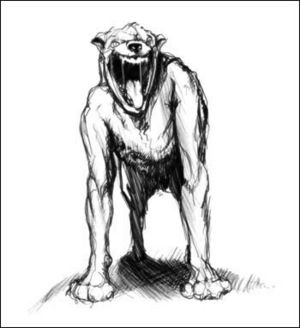 The chemosit or Nandi bear is a cryptid, reported to live in Africa, especially in east-central Kenya.

Bernard Heuvelmans thinks that duba originates from either the Arabic word for bear (dubb) or their word for hyena (dubbah).

The chemosit is described as having either the body of a big ape or a combination of the lower body of a hyena with the chest, arms, and head of a great ape. It has long reddish to yellow hair, short broad tail, sometimes going on four legs, sometimes on two. The claws and teeth of the chemosit are supposed to be very sharp. By many accounts, this cryptid has the mannerisms and posture of a bear. It climbs trees and is brown and small.

It is a nocturnal animal and is said to attack humans only on dark moonless nights. It has been said to prey upon the children and natives from the villages. There are cases when natives haved killed the beast, normally by burning a hut it had entered. Westerners have also shot at the beast, but without success. The Nandi Bear has eluded both hunters and researchers alike to remain unclassified by the scientific community.

The chemosit is said to be as comfortable on the tree tops as it is on the ground, and to attack humans on sight, allegedly being responsible for several killings of men and live stock. They seem to consider humans delicacy and will not hesitate to attack and devour a lone human (or a small group), their favorite part being the brain. They will often haunt a village, taking a fresh victim each night.

Unlike westerners, natives continue to report the Nandi Bear committing its violent crimes against them. Kitapmetit Kipet, the head of a Nandi village reports the Nandi Bear as

"...a devil which prowls the nganasa (hut settlement) on the darkest nights, seeking people, especially children, to devour; it is half like a man and half like a huge, ape-faced bird, and you may know it at once from its fearful howling roar, and because in the dark of night its mouth glows red like the embers of a log."

Herodotus when reporting on the fauna of Libya, says there were pythons, lions, elephants, asps, horned asses, and bears. Pliny also reports that bears live in Africa, although he disputes these claims. More recently, Dr. O. Dapper wrote in 1668 that the Congo was inhabited by "squirrels with tails much larger than those in Europe, bears, wild cats, and very venomous vipers...".

The natives of East Africa have told the story of the Nandi Bear for centuries. During that time writers and researchers alike have made reports of bear-like creatures throughout Africa, never truly describing them; just saying they were bear-like. It wasn't until the early part of the 20th century that Westerners began seeing and describing what the natives have seen for centuries before them.

Two well-known Kenya colonists, Major Braithwaite and Mr. C. Kenneth Archer gave one of the best accounts of the Nandi Bear. They saw an animal that they thought was a lioness at first, however they later noticed the impression of a snout. The beast stood very high forward, about 4 ft. 3 ins. to 4 ft. 6 ins. at the shoulder. "The back," they said, "sloped steeply to the hindquarters and the animal moved with a shambling gait which can best be compared with the shuffle of a bear. The coat was thick and dark brown in color. Finally, the beast broke into a shambling trot and made for a belt of trees near the river, where it was lost." Due to their experience, their story is not likely to be that of a misidentification. Their report is similar to others of the Nandi Bear.

As a member of the Nandi Expedition in the early 1900's, Geoffrey Williams had an encounter with the Nandi Bear. He wrote the following in the Journal of the East Africa and Uganda Natural History Society:

"I was travelling with a cousin on the Uasingishu just after the Nandi expedition, and, of course, long before there was any settlement up there. We had been camped ... near the Mataye and were marching towards the Sirgoit Rock when we saw the beast ... I saw a large animal sitting up on its haunches no more than 30 yards away. Its attitude was just that of a bear at the 'Zoo' asking for buns, and I should say it must have been nearly 5 feet high ... it dropped forward and shambled away towards the Sirgoit with what my cousin always describes as a sort of sideways canter… I snatched my rifle and took a snapshot at it as it was disappearing among the rocks, and, though I missed it, it stopped and turned its head round to look at us ... In size it was, I should say, larger than the bear that lives in the pit at the 'Zoo' and it was quite as heavily built. The fore quarters were very thickly furred, as were all four legs, but the hind quarters were comparatively speaking smooth or bare ... the head was long and pointed and exactly like that of a bear ... I have not a very clear recollection of the ears beyond the fact that they were small, and the tail, if any, was very small and practically unnoticeable. The color was dark ..."

In 1912, Major Toulson, a military settler upon the Uasin Gishu plain, had an encounter with a Nandi Bear. He reported the following to British anthropologist C.W. Hobley:

"... one of my boys came into my room and said that a leopard was close to the kitchen. I rushed out at once and saw a strange beast making off: it appeared to have long hair behind and was rather low in front. I should say it stood about 18 in. to 20 in. at the shoulder; it appeared to be black, with a gait similar to that of a bear--a kind of shuffling walk ... "

N.E.F. Corbett, the District Commissioner of Eldoret, reported another encounter with the Nandi Bear in March 1913:

I was having lunch by a wooded stream, the Sirgoi River, just below Toulson's farm ... to my surprise I walked right into the beast. It was evidently drinking and was just below me, only a yard or so away ... it shambled across the stream into the bush ... [I] could not get a very good view, but am certain that it was a beast I have never seen before. Thick, reddish-brown hair, with a slight streak of white down the hindquarters, rather long from hock to foot, rather bigger than a hyena, with largish ears. I did not see the head properly; it did not seem to be a very heavily built animal.

Many reports of the Nandi Bear surfaced from workers of the Madadi Railway when it was under construction. One railway employee Schindler discovered a series of canine-like tracks. They were 8.5 inch-long tracks with five toes instead of four (like most dogs) and a rather long heel. The sketches he made of these tracks show their unique characteristics. G.W. Hickes, an engineer in charge of building the railway throughout East Africa saw the Nandi Bear on March 8, 1913. He reported the following:

"It was almost on the line when I first saw it and at that time it had already seen me and was making off at a right angle to the line ... As I got closer to the animal I saw it was not a hyena. At first I saw it nearly broadside on: it then looked about as high as a lion. In color it was tawny--about like a black-maned lion--with very shaggy long hair. It was short and thickset in the body, with high withers, and had a short neck and stumpy nose. It did not turn to look at me, but loped off--running with its forelegs and with both hind legs rising at the same time. As I got alongside it, it was about forty or fifty yards away and I noticed it was very broad across the rump, had very short ears, and had no tail that I could see. As its hind legs came out of the grass I noticed the legs were very shaggy right down to the feet, and that the feet seemed large..."

Not long after Hickes had his sighting, a native servant saw an animal much like the one Hickes saw, but reported it to be standing on its hind legs. A subcontractor had seen the same animal or one like it and mentioned it having a thick mane, long claws, large teeth, and an upright stance of about six feet. In 1919, a farmer named Cara Buxton related the following story:

"A short time ago a 'Gadett' [or geteit, another name for the Nandi Bear] visited the district. This name is given to the animal by the Lumbwa and signifies the 'brain-eater.' Its first appearance was on my farm, where the sheep were missing. We finally found all ten, seven were dead and three were still alive. In no case were the bodies touched, but the brains were torn out. During the next ten days fifty-seven goats and sheep were destroyed in the same way; of these thirteen were found alive ..."

The animal that committed these crimes was eventually tracked down and killed by the natives with spears. This animal turned out to be nothing more then a common, but large, spotted hyena that had turned to eating brains for unknown reasons.

Around 1920, British Museum authorities investigated the Nandi bear because of the accounts that this animal was attacking human beings. Skulls and hides of the alleged animals were sent to the museum to be examined. The skulls and hides turned out to be those of leopards and hyenas, often times, the pelt of one was attached to the skull of another. A paw print tracing was sent, but this tuned out to be impressions of a hyena’s paw superimposed upon another one.

Sightings by westerners after the 1920's are rare, but still do occur. In recent times hunters searching for the beast report finding tracks and hearing blood curdling howls, unlike those made by any known animals.

Heuvelmans mentions that the strangest fact about the Nandi Bear is not its appearance, but its supposed ferocity; even those animals notorious for attacking man will do so without provocation only extremely rarely. As A. Hyatt Verrill has noted, those that are man-eaters usually turn out to be old, weak, or otherwise limited in their hunting ability. However, Heuvelmans goes on to suggest that over-hunting by humans, disease, or encroachment on territory can make any animal into a man-eater.