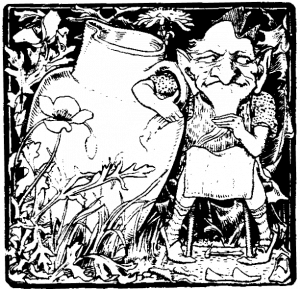 A representation of a Clurichaun in T. C. Croker's Fairy Legends and Traditions of the South of Ireland

The Clurichaun is an Irish fairy creature which resembles its cousin, the leprechaun.

Despite being always drunk, the Clurichaun is impeccably well-groomed and well-dressed. He also wears a red hat which may be made of plants.

One of their favorite trick is to ride sheep and dogs like horses in the moonlight. But if you treat them well they will protect your wine cellar. They will prevent casks from leaking and wines from going bad, will chase away all those who come uninvited by the master of the house. Occasionally the can be heard singing Irish folk songs in the wine cellar. If mistreated, they will wreak havoc on your home and spoil your wine stock.

The Clurichaun is a character in Neil Gaiman’s The Sandman (DC Comics/Vertigo)|The Sandman]].