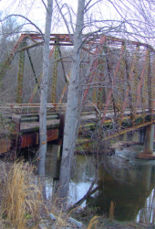 There are many urban legends attached to bridges, especially in America. The sound of a baby can be, or has been, heard from those bridges. It would be the alleged ghost of a young child/children being killed nearby, or thrown from the bridge into the river or creek below.

Rogue's Hollow Historical Society "Map to the Mill" link refers to the bridge; road and creek are visible in "Chidester Hill" photo.

Maud Hughes Road is located in Liberty Township, Ohio. It has been the site of many terrible accidents and suicides. Railroad tracks lay 25 feet below the bridge, and at least 36 people have been reported dead on or around the Maud Hughes Road Bridge. Ghostly figures, mists, and lights have been seen, as well as black hooded figures and a phantom train. The legend says that a car carrying a man and a woman stalled on top of the bridge. The man got out to get help while the girl stayed. When the man returned, the girl was hanging on the bridge above the tracks. The man then perished with unexplained causes. To this day, many people have reported hearing the ghosts' conversations, then a woman's scream followed by a man's scream. Another story says that a woman once threw her baby off the bridge and then hanged herself afterwards.[2][3][4]

Although the bridge is off of Egypt Road, it is actually on what used to be West Pine Lake Rd., which now dead-ends to the east of the bridge. Legends attribute the crying baby to one that fell in and accidentally drowned. The closed road remains as an access way to high voltage utility lines.[1]

The "baby cries" can be heard at night or during the day. The sounds actually come from nearby toads.[citation needed]

This crybaby bridge is in the area of the melon heads. The bridge is on Wisner Rd. just north of Kirtland Chardon Rd. A large section of the road is permanently closed; the bridge lies just before the south end of the closed section.

There is a purported "Crybaby Bridge" off Beaver Dam road in Beltsville, near the Department of Agriculture's Beltsville Agricultural Research Center. It is in or near the areas where the legendary goatman has reported to have been seen.

There is another on Governor's Bridge Road, near Bowie, at the Anne Arundel County line (Patuxent River). This bridge is a late 19th/early 20th century steel truss bridge; legend states that a woman and her baby were murdered in the 1930s. Purportedly, if one parks one's car at or near the bridge, a baby can be heard crying; sometimes a ghost car will creep up from behind, but disappear when the driver or passenger turns around to see it.[5]

In Weird Maryland: Your Travel Guide to Maryland's Local Legends and Best Kept Secrets, authors Matt Lake, Mark Moran and Mark Sceurman include 3 first-person narratives of Crybaby Bridge experiences in Maryland. The locations mentioned are The Governor's Bridge Road bridge alread discussed above, one on Lottsford Vista Road and another unspecified but possibly also referring to the Lottsford Vista Road bridge as well. The latter narratives make mention of purported Satanic Churches near the bridge and appearance of the Goatman.[6]

In 1999, Maryland folklorist Jesse Glass presented a case against the existence of several Crybaby Bridges as being genuine folklore; instead contending that they were fakelore that was knowingly being propagated through the internet.

According to Glass, near identical stories of Cry Baby Bridges; said to be located in Maryland and Ohio, began to appear online in 1999, but that the events which they described could not be affirmed by him as fact or preexisting folklore through either local oral history or the media.

Among the concerns presented by Glass was that the story of a particular bridge; said to be located in Wesminister, Maryland, centered around the murder of escaped slaves and African American children. Back in the 1800's, unwanted black babies were drowned by being thrown off the side of this bridge. It's located specifically on Rockland Road, just off of Uniontown Road outside of Westminster's city limits past Rt. 31. Regional newspapers which usually covered racially motivated murders of the period - Specifically the American Sentinel and the Democratic Advocate - made no mention of the events described online.

However, in their book Weird U.S.: Your Travel Guide to America's Local Legends and Best Kept Secrets, authors Mark Moran & Mark Sceurman relate the story of a purported Crybaby Bridge on Lottsford Vista Road between Bowie and Upper Marlboro, asserting that this bridge has "made believers out of many skeptics." The text included from their informant makes no mention of escaped slaves but does repeat a now familiar component of such legends: an out-of-wedlock birth.

Part of this article consists of modified text from Wikipedia, and the article is therefore licensed under GFDL.
Retrieved from "https://www.monstropedia.org/index.php?title=Crybaby_bridge&oldid=12334"
Categories: