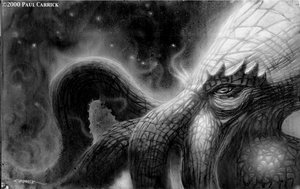 Cthulhu as depicted by Paul Carrick

Cthulhu (other spellings: Kutulu, Kthulhut, Thu Thu, Tulu, and many others) is a fictional character in the Cthulhu Mythos created by horror author H. P. Lovecraft.It is sometimes claimed that Cthulhu corresponds to a monster or god in Sumerian mythology named "Kutulu" (or sometimes "Cuthalu"). In reality, "Kutulu" comes from Simon's Necronomicon, which is a fiction based loosely on Sumerian mythology, among other things. Cthulhu is often preceded by the title Great or Dread. Lovecraft suggested that Cthulhu is pronounced "Khlul'-hloo" Lovecraft said that "the first syllable [of Khlul'-hloo is] pronounced gutturally and very thickly. The u is about like that in full; and the first syllable is not unlike klul in sound, hence the h represents the guttural thickness." S. T. Joshi points out, however, that Lovecraft gave several differing pronunciations on different occasions. According to Lovecraft, however, this is merely the closest that the human vocal apparatus can come to reproducing the syllables of an alien language. Other possible pronunciations include k-Thoo-Loo.

Although the cycle of stories written by Lovecraft, his protégés, and his literary successors bear the label "Cthulhu Mythos" (a term invented by August Derleth and never used by Lovecraft), Cthulhu is arguably one of the least terrible creatures in the pantheon. Cthulhu himself (although commonly referred to as "he", Cthulhu's gender is never defined and is probably an absurd definition to give to "outre" creatures such as the Great Old Ones; however, there is the impression that another being in the mythos, Shub-Niggurath, an Outer God, has distinct female qualities due to her presumed fecundity) debuted in Lovecraft's short story "The Call of Cthulhu" (1928)—though he makes minor appearances in a few other of Lovecraft's works.

If I say that my somewhat extravagant imagination yielded simultaneous pictures of an octopus, a dragon, and a human caricature, I shall not be unfaithful to the spirit of the thing. A pulpy, tentacled head surmounted a grotesque and scaly body with rudimentary wings... It represented a monster of vaguely anthropoid outline, but with an octopus-like head whose face was a mass of feelers, a scaly, rubbery-looking body, prodigious claws on hind and fore feet, and long, narrow wings behind. This thing, which seemed instinct with a fearsome and unnatural malignancy, was of a somewhat bloated corpulence...
— H.P. Lovecraft, "The Call of Cthulhu"

Cthulhu is a Great Old One and is by far the most prominent member of the group, as he is their High Priest. He currently lies in death-like sleep in the sunken city of R'lyeh somewhere in the Southeast Pacific Ocean. "When the stars are right", R'lyeh will rise from the sea, never to sink again, and Cthulhu will awaken and revel across the world — "ravening for delight".

It is implied that Cthulhu will ultimately require the assistance of his human cult to escape from his watery tomb in R'lyeh, though this hubris runs counter to Lovecraft's defining philosophy that mankind is insignificant in the cosmic scheme of things. It is worth noting, however, that Cthulhu's tomb is warded by the Elder Sign, which may prevent the intervention of other, more powerful, beings. Unlike other human religions, the cult of Cthulhu seeks no reward for serving their "god" such as eternal paradise after death. They serve only to bring the Great Clearing Off and will no doubt be served the same fate as the rest of Earth's denizens.

Cthulhu is said to be colossal, but his exact size is not given. In Lovecraft's story, he was able to pursue a ship across the Pacific Ocean for some distance, albeit on some underwater portion of risen R'lyeh, yet still keep most of his body above water. Although he can communicate with "the fleshy mind of mammals" in their dreams, this contact is currently blocked by his present immersion in seawater. Some said that Cthulhu size is no different than Mount Everest

Cthulhu cannot be harmed by mortal weapons, as his body is made of cosmic material. He can control his physical form by sheer will alone and can regenerate any damage he suffers by summoning material from the depths of space. When the Old Ones tried to destroy his earthly form, all such attempts failed. The mere position of the stars interferes with his mental control so that he must remain sleeping in sunken R'lyeh.

Cthulhu is sometimes regarded as "evil", but this is not how he is depicted in "The Call of Cthulhu" and other works. Instead, he is portrayed as amoral, with an ethic that transcends conventional notions of good and evil. Cthulhu's amorality might be compared to what S. T. Joshi and David E. Schultz call the "anti-mythology" of Lovecraft's fiction. In most mythologies, man's significance in the universe is validated by his connection to divine agents with similar moral values. Lovecraft shattered this conceit by basing his stories on the "premise that common human laws and interests and emotions have no validity or significance in the vast cosmos-at-large... To achieve the essence of real externality, whether of space or time or dimension, one must forget that such things as organic life, good and evil, love and hate, and all such local attributes of a negligible and temporary race called mankind, have any existence at all... When we cross the line to the boundless and hideous unknown—the shadow haunted Outside—we must remember to leave our humanity and terrestrialism at the threshold." Cthulhu's nature seems to be consistent with this view.

Cthulhu is closely identified with this quotation from the Necronomicon:

That is not dead which can eternal lie,
And with strange æons, even death may die.

He is also associated with the phrase "ph'nglui mglw'nafh Cthulhu R'lyeh wgah'nagl fhtagn", which translates to "In his house at R'lyeh dead Cthulhu waits dreaming". This line is ostensibly part of a couplet from the Necronomicon, the second line of which is "yet He shall rise and His kingdom shall cover the Earth."

Cthulhu has several avatars, including B'moth (Beh'moth, the Devourer) and Chorazin, although these are not mentioned in Lovecraft's work and are actually later additions. Cthulhu is served by the beings known as the star-spawn (see below), which look like smaller versions of Cthulhu himself. His coming to earth aeons ago and the sinking of R'lyeh were recorded by the Elder Things (in At the Mountains of Madness) with whom he warred.

In Derleth's stories, Cthulhu is not as powerful as the other god-like mythos creatures, nor is he much of a leader. In fact, the two most powerful beings known of in the mythos are, in order, Azathoth (The Blind Idiot God) and Yog-Sothoth (The Lurker at the Threshold). Nonetheless, Cthulhu's cult is the most widespread and has the largest number of worshippers.

Cthulhu's cult has survived through the centuries and is arguably the most effective at recruiting new members. While Cthulhu dreams in R'lyeh, his cult actively pursues its agenda in his name. The cult's behind-the-scenes activities play a major role in Derleth's stories, and through them Cthulhu can implicitly exert his influence.

Although Cthulhu is the best known figure in the pantheon, his alliance with the other mythos creatures in Derleth's stories is an uneasy one at best. At least one other Great Old One rivals his power and appears to be his personal enemy. That being is Hastur, Lord of the Interstellar Spaces, who currently resides in the Hyades.

Although Derleth did not create Hastur, he did introduce him into the mythos as Cthulhu's half-brother and worst enemy. Various stories feature Hastur's cult assisting those trying to prevent Cthulhu from awakening. Other stories simply mention the rivalry between the two.

In Derleth's "The Return of Hastur", first published in March 1939, the two gods even meet face-to-face, albeit briefly. Many mythos authors, however, rarely dwell on this assumed rivalry, if they acknowledge it at all. Also, Hastur's domain is limited to a region far beyond Earth (Carcosa) and rarely infringes on Cthulhu's territory.

According to the Ponape Scripture, Idh-yaa is the "wife" of Cthulhu. No description for Idh-yaa is given, but the being is said to dwell on a planet near the double star Xoth. It is here where Cthulhu mated with Idh-yaa to produce their four progenies.

The star-spawn of Cthulhu (or Cthulhi) are beings who arrived on Earth with Cthulhu. They resemble Cthulhu and may be his progeny. Like Cthulhu, they can mutate their shapes, but always retain their master's distinctive outline.

After coming to Earth, the star-spawn built a great basalt city called R'lyeh on an island in the Pacific Ocean. They warred briefly with the Elder Things, but thereafter established a treaty. When R'lyeh sank, the star-spawn became trapped beneath the sea with Cthulhu (nonetheless, a few of his spawn may still be free).

In his exploration of horror as a genre, Danse Macabre, Stephen King describes Cthulhu as Lovecraft's form of vaginal symbolism-considering that it is an alien, tentacled, gelid being.