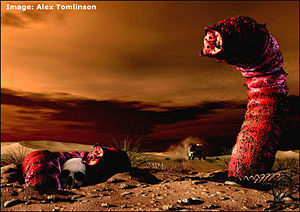 The local name is allghoi khorkhoi (or orghoi) which means "blood-filled intestine worm," because it is reported to look like the intestine of a cow.

It is described as a fat, bright red worm, two to five feet long (about 0.6 to 1.5 meters), which is vividly likened to a living cow's intestine.

The death worm is so feared among the people of Mongolia that many consider the mere mention of its name bad luck. It is attributed with the dramatic ability to kill people and animals instantly at a range of several *feet. It is even believed that the worm sprays an immensely lethal poison; a sort of acidic liquid that immediately makes anything it touches turn yellow and corroded. The nomads also said that the color yellow attracts the Allghoi khorkhoi. The analogy with the basilick (cockatrix) is strong as this creature has also the power to kill instantaneously anyone who tries to observe it. The colour yellow attracts the worm.