Dracs are fairy creatures in the folklore of South France. 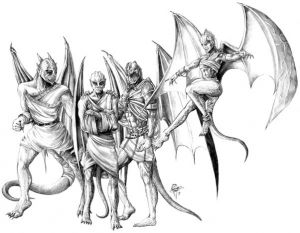 The word Drac is apparently derived from Draco or Duerg. We must recollect that the Visigoths long occupied Provence and Languedoc. Fa le Drac, in Provençal, signifies Faire le diable.

Goudelin, a Provençal poet of the seventeenth century, begins his Castel en l’Ayre with these lines:

Gervase of Tilbury, who resided in the kingdom of Arles around 1250, said about the first inhabitants of Arles in De lamis et dracie et phantassis, :

“They also commonly assert, that the Dracs assume the human form, and come early into the public market-place without any one being thereby disturbed.

These, they say, have their abode in the caverns of rivers, and occasionally, floating along the stream in the form of gold rings or cups, entice women or boys who are bathing on the banks of the river; for, while they endeavour to grasp what they see, they are suddenly seized and dragged down to the bottom: and this, they say, happens to none more than to suckling women, who are taken by the Dracs to rear their unlucky offspring; and sometimes, after they have spent seven years there, they return to our hemisphere.

These women say that they lived with the Dracs and their wives in ample palaces, in the caverns and banks of riven. We have ourselves seen one of these women, who was taken away while washing clothes on the banks of the Rhone. A wooden bowl floated along by her, and, in endeavouring to catch it, having got out into the deep water, she was carried down by a Drac, and made nurse to his son below the water. She returned uninjured, and was hardly recognised by her husband and friends after seven years’ absence.

“After her return she related very wonderful things, such as that the Dracs lived on people they had carried off, and turned themselves into human forms; and she said that one day, when the Drac gave her an eel-pasty to eat, she happened to put her fingers, that were greasy with the fat, to one of her eyes and one side of her face, and she immediately became endowed with most clear and distinct vision under the water. When the third year of her time was expired, and she had returned to her family, she very early one morning met the Drac in the market-place of Beaucaire.

She knew him at once, and saluting him, inquired about the health of her mistress and the child. To this the Drac replied: ‘Harkye,’ said he, ‘with which eye do you see me?’ She, pointed to the eye she had touched with the fat: the Drac, immediately thrust his finger into it, and he was no longer visible to any one.”

“There is also on the banks of the Rhone, under a house, at the North-gate of the city of Arles, a great pool of the river . . . . In these deep places, they say that the Dracs are often seen of bright nights, in the shape of men.

A few years ago there was, for three successive days, openly heard the following words in the place outside the gate of the city, which I have mentioned, while the figure as it were of a man ran along the bank: ‘The hour is passed, and the man does not come.’

On the third day, about the ninth hour, while that figure of a man raised his voice higher than usual, a young man ran simply to the bank, plunged in, and was swallowed up; and the voice was heard no more.”

There are variations on the story. Some say lavender seller got her dragon-sight by accidentally getting 'Dragon cream' in her eye. Others say the Drac gave her a box of human fat to rub into the hatchling's scales so that it would be visible to humans (otherwise she would not be able to care for it). She was supposed to clean the fat off her hands every evening with special water; but, one evening, she forgot to do so, rubbed her eyes with her dirty hands, and acquired her dragon-sight. Some say it was both eyes, or just the one. Still other versions confuse this beast with other monsters of regional folklore, and claim the Drac was slain by some saint or heroine.

From 20–22 June each year, the town Beaucaire in Provence, celebrates the myth of the Drac. The townsfolk bring the monster to life the form of a long procession, which snakes through the town led by a swarm of children carrying Chinese-type lanterns.