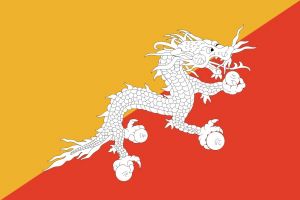 The Flag of Bhutan features Druk

Druk is a Thunder Dragon in Bhutanese mythology.

Druk is central on the Bhutanese Flag, holding jewels to represent wealth. In Dzongkha (the official language of Bhutan), Bhutan is called Druk Yul, or Land of Druk.

The national anthem of Bhutan, Druk Tsendhen, translates into English as 'The Kingdom of Druk'. The Bhutanese leaders are known as Druk Gyalpo - Dragon Kings.