Ebu Gogo is a race of human-like creature which appears in the mythology of the people of the island of Flores, Indonesia. 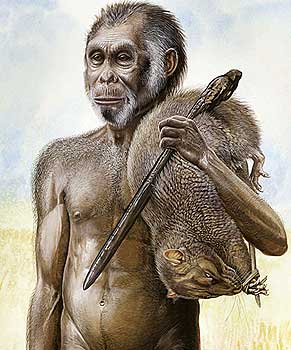 A portrait of an Ebu Gogo

These "little people" are said to similar form to the leprechaun or elf, about one meter tall, covered in hair, pot-bellied and with ears that stick out. The women Ebu Gogo had extremely pendulous breasts, so long that they would throw them over their shoulder. They are held to walk somewhat awkwardly and are often said to be "murmuring" in what is assumed to be their own language. It is also said by the islanders that the Ebu Gogo can repeat what is said to them in parrot-like fashion. Another fantastic attribute of ebu gogo is their reputed proclivity to swallow things whole, including rice mortars, puppy dogs and piglets.

Nage distinguish ebu gogo from "spirits" (a general category contextually designated as nitu) with reference to the hairy creature's lack of extraordinary powers -- for example, the ability to disappear, change shape, transform into animals, and so on (Forth 2005:15).

Flores natives say they will eat anything, including raw meat, fruit, vegetables and the occasional human baby.

The islands of Flores in Indonesia

People living around the volcano told him a consistent story of the hairy creatures that devoured whatever they could grasp in their long fingers. The villagers tolerated the stealing of food until the Ebu Gogo began to snatch babies and eat them too. They were driven away from human habitation and forced to seek refuge in the caves at Liang Bua. Some stories say that they were exterminated by the villagers who forced them out of the cave with bales of burning grass. Incidentally, at the very same caves, scientists have found seven dwarf skeletons belonging to Homo floresiensis that date back about 13,000 years ago. The people of Flores believe that the Ebu Gogo were alive at the time of the arrival of Portuguese trading ships over 400 years ago, and some hold that they survived as recently as 100 years ago but are now no longer seen.

An article in New Scientist (Vol. 186, No. 2504) gives the following account of folklore on Flores surrounding the ebu gogo:

The Nage people of central Flores tell how, some 300 years ago, villagers disposed of the Ebu Gogo by tricking them into accepting gifts of palm fibre to make clothes. When the ebu gogo took the fibre into their cave, the villagers threw in a firebrand to set it alight. The story goes that all the occupants were killed, except perhaps for one pair, who fled into the deepest forest, and whose descendants may be living there still.

Archaeologists are planning further investigations of Flores, including caves where the Ebu Gogo are said to have lived recently, and thus may shed light on this question. The prospect that some hobbits still exist in pockets of thick, fertile jungle on Flores is extremely unlikely, says Douglas Hobbs, a member of the team that discovered Homo floresiensis.