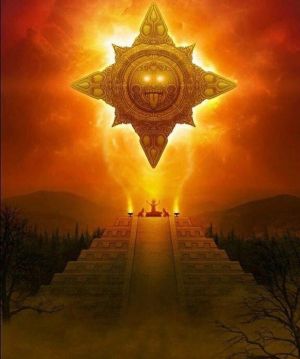 Egregore (also spelled egregor; from French égrégore, from Ancient Greek ἐγρήγορος, egrēgoros 'wakeful') is an occult concept representing a distinct non-physical entity that arises from a collective group of people. Historically, the concept referred to angelic beings, or watchers, and the specific rituals and practices associated with them, namely within Enochian traditions.

More contemporarily, the concept has referred to a psychic manifestation, or thoughtform, occurring when any group shares a common motivation—being made up of, and influencing, the thoughts of the group.

Energy that feeds the egregore

According to author Gaeten Delaforgem, this psychic, astral and autonomous entity (egregore) will continue as long as thought energy feeds it but it does not have to be the same people feeding energy for the entity to continue and eventually become independent. Egregores can be kept alive when new generations add their thought energy to the entity. Santa Claus, the Easter Bunny, the Spirit of Christmas are all egregores, as are the Devil and the Grim Reaper.

The egregore connects the people who created it to the psychic energy which created it. It influences others as well. Adolf Hitler used the hatred and anger in the minds of the German people after their defeat in World War I to create an egregore, focusing that energy. A fad in popular culture is a temporary and very potent egregore.

In 1896 a Frenchman by the name of Gustave Le Bon wrote a book called The Crowd, A Study of the Popular Mind. In the book Le Bon shows how an individual on his own may act with the highest moral character and compassionate heart but in a crowd that same individual can be swept away and behave as a total “blockhead” losing the sense of his own personal integrity to the energy of the crowd. The “lynch mob mentality” is an excellent example here. Wall Street is another example of the crowd mentality, when a few manipulators sell strategically and the whole market plummets. A small group can create an egregore, and that psychic energy can spread to the crowd who mindlessly follow. The crowd egregore arises quickly. Its passion carries the crowd, but because the crowd is not an organized, stable group with intention, the demon egregore is quickly dissipated.

The same is true of any organization – be it a church or civil rights movement, Ku Klux Klan, Taliban, or a monastery. Whether the group is organized to do good or evil, indoctrination can happen quickly. As Gustav La Bon pointed out, reason is not part of the crowd mentality. Becoming caught up in the passionate hatred or love of an egregore can be hard to resist. An organized group with a very strong intention builds and maintains an egregore with its passion, and the thought form affects new initiates. The power of the egregore to help and sustain a group increases over time through the repeated actions (ceremonies or rituals) of its members. The egregore can raise its members from the material and connect them to the divine or to the depths of human depravity.

The concept of egregorial powers has its roots in ancient Greek culture and in Asian cultures. It was for example featured in the Book of Enoch.

At later times the term and concept found its way in other languages. Manuscrit trouvé à Saragosse, or The Manuscript Found in Saragossa which was written in French by the Polish author Count Jan Potocki (1761–1815) in the Russian Empire in the early 19th century features the term "Egregores," referring to "the most illustrious of fallen angels." However, it is important to take note of the novel's heavy orientalist and fantastical bent.

The term "egregore" was also featured by the French poet Victor Hugo, in La Légende des siècles ("The Legend of the Ages"), First Series, 1859, where he uses the word "égrégore" first as an adjective, then as a noun, while leaving the meaning obscure.The author seems to have needed a word rhyming with words ending in the sound "or". It would not be the only example of word creation by Victor Hugo. However, the word is the normal form that the Greek word ἑγρήγορος (Watcher) would take in French. This was the term used in the Book of Enoch for great angel-like spirits.

Eliphas Lévi, in Le Grand Arcane (The Great Mystery, 1868) identifies "egregors" with the tradition concerning the "Watchers", the fathers of the nephilim, describing them as "terrible beings" that "crush us without pity because they are unaware of our existence."

The concept of the egregore as a group thoughtform was developed in works of the Hermetic Order of the Golden Dawn and the Rosicrucians and has been referenced by writers such as Valentin Tomberg, notably in his anonymously-penned book Meditations on the Tarot. It was also mentioned in the book El maravilloso universo de la magia, by Chilean author Enrique Barrios.

A well known concept of the egregore is the GOTOS (Gradus Ordinis Templi Orientis Saturni (33°)) of the Fraternitas Saturni.

A 1987 article by Gaetan Delaforge in Gnosis magazine defines an egregore as a kind of group mind that is created when people consciously come together for a common purpose.