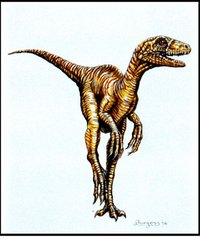 First discovered in 1991, this early bipedal dinosaur is believed to be one of the first dinosaurs. Living in the late triassic period, it's more than likely a close relative of an archosaur or theropod, rather than a seperate species of dinosaur, found with other early dinosaurs such as a Herrerasaurus.

It was a tiny, two legged carnivore found in the northwestern region in Argentina, it's dated to have lived between 230 to 225 million years ago. It's scientific name Eoraptor Lunensis means dawn of the moon, attributed to where it was discovered. It was abut one meter long, and weighed close to 20 pounds. It had functioning three fingers on it's hand, that ended with large claws, and two smaller digits which would have been useless, suggesting it's relation to [[theropod]s. It more than likely ate small animals, being a quick sprinter, but containing both carnivore and herbavore teeth, it may have been omnivorous.

It was first discovered in 1991, by Paul Sereno from the University of Chicago. It was uncovered in the Ischigualasto Basin, that was a river valley inn the late triassic period, but is now desert badlands. It's lack of a sliding jaw, a few curved and saw edged teeth, and lacking other features specialized in more recent carnivores, is what suggests it was a primitive, dinosaur.

This little meat eater is a saurischian, that suprisingly possessed herbavore teeth. With a fully developed hand, scientists believe it may be an even earlier dinosaur than the Herrerasaurus. Only a few prosauropods that have recently been uncovered in Madagascar are believed to be older.