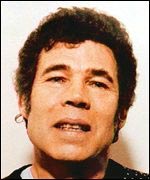 Frederick Walter Stephen West (September 29, 1941 – January 1, 1995) was an English construction worker and serial killer who, together with his wife Rosemary West, is believed to have murdered at least twelve young women, many at the couple's home in Gloucester, England. He committed suicide by hanging in his cell at Winson Green Prison while being held on suspicion of murder.

West was born in Much Marcle, Herefordshire, into a poor family of farm workers. He left school aged fifteen and began work as a casual labourer. After a spate of petty crime and a near-conviction for child molestation in November 1961, resulting in the pregnancy of his thirteen-year-old sister, he moved away from his parents' rural home in disgrace to live with an aunt until the Spring of 1962. His sister had an abortion and the pregnancy was terminated.

He married Catherine (Rena) Costello, a prostitute, in November 1962 and they moved to Glasgow. She gave birth to a girl, Charmaine, in March 1963, although the girl's father was a Pakistani bus driver. A second child, Anna Marie, was born to the couple in July 1964. She was West's child.

During this period, West was working as an ice cream man but on 4 November 1965 he accidentally ran over a four-year-old boy with his ice-cream van. Due to bad feeling against him, and feeling that it was unsafe for him to carry on living in Glasgow, six weeks later West, Anna McFall and Rena West moved to Gloucester, and West took a job in an abattoir. Their marriage under strain, the Wests separated, and when she returned in 1966 he was living with Anna McFall. West killed the heavily pregnant McFall around August 1967 and buried her in a field near Much Marcle. Rena returned to live with him and their children for a short time before leaving again.

In late 1968 West met Rosemary Letts (b. 1953). She became pregnant by him, something she concealed from her parents until West was serving a short prison sentence for unpaid fines. She left her family home and moved in with West in Midland Road in Gloucester. She gave birth to a girl, Heather, on 17 October 1970, and often neglected the older children. Charmaine died in mid-1971 while West was still in prison, probably at Letts' hands. West dismembered the body upon returning from prison, and hid it under the floor. Rena returned to Gloucester in late August 1971 looking for her children. West murdered her one night after she was drunk and disposed of the body near his childhood home. He committed bigamy by marrying Rosemary Letts on 29 January 1972, but West regularly encouraged Rose to prostitute herself. Rose gave birth to a girl, Mae, in June 1972, and the family moved to a new home at 25 Cromwell Street, an unprepossessing three-story house.

West adapted the cellar as a place for his wife to work, extending and soundproofing it. It was there that West raped 17-year-old Caroline Owens, whom they had taken in as a nanny, in late 1972. West was arrested and went to trial in January 1973, but he was only fined. West then began following a pattern: young females would come to their home as lodgers or to care for the children and would be abused and then murdered. The first victim was Lynda Gough, murdered in April 1973. The second was 15-year old Carol Ann Cooper, abducted and murdered around November 1973, and the third was Lucy Partington (a relative of Martin Amis) who was murdered in the days of January 1974. The bodies were dismembered and disposed of under the cellar floor as West extended and renovated the building. Therese Siegenthaler was murdered around Easter 1974. Following on from this, Shirley Hubbard was murdered in November 1974, just after the first anniversary of Carol Ann Cooper's murder. No-one can be sure whether the Wests marked the first anniversary of Lucy Partington's abduction and murder just after Christmas 1974 by doing the same to someone else, for if they did the victim wasn't buried under the cellar. However, just before the first anniversary of their abduction and murder of Therese Siegenthaler, they did the same to Jaunita Mott in April 1975. They were all buried under the cellar floor.

There was then a three-year hiatus (unless further unfortunate victims were killed and buried elsewhere) before Shirley Robinson, an eight-months pregnant female, was murdered in May 1978 and buried in the garden. In August 1979 the Wests abducted, abused, tortured and killed Alison Chambers, just as they did to the victims mentioned above from 1973 onwards.

The next and, as far as is known, last victim to be buried at Cromwell Street was West's daughter Heather, who was murdered and buried in the garden in June 1987.

Following the report of the rape of West's 13-year-old daughter in May and June 1992, police obtained a search warrant. After examining the house, they arrested West for rape and sodomy of a minor and Rose as an accomplice on 6 August 1992. She was also charged with child cruelty. Police interviewed the West's children, discovering the abuse and the mysterious disappearances of Charmaine, Heather and Rena. The six surviving children still at home were taken into care.

The rape case against West collapsed when the two main witnesses declined to testify on 7 June 1993. However, the police obtained a further search warrant in February 1994, allowing them to excavate the garden in search of Heather. The police began searching the house and excavating the garden on February 24 1994. On the 25th, after the police had uncovered human bones, West confessed, retracted and then re-confessed to the murder of his daughter, denying that Rose was involved. Rose was not arrested until April 1994, initially only on sex offenses. The extended search and the grisly finds prompted much media interest.

On 30 June 1994 they appeared in the dock in Gloucester, the first time they had seen each other since 25 February, when Fred was arrested for the murder of Heather. He attempted to touch Rose in the dock to console her but she totally ignored him. Outside, Fred West was arrested on suspicion on murdering Anna McFall, whose body was found on 7 June 1994. On the evening 3 July 1994 he was charged with her murder.

On December 13 1994, West was charged with twelve murders, and his wife with ten. She ignored him a second time, and on January 1, 1995, he committed suicide in his cell at Birmingham's Winson Green Prison. The evidence against Rose was largely circumstantial, and she did not confess. She was tried from October 1995, found guilty of all ten murders and sentenced to life imprisonment. A whole life tariff was imposed on her, and she is extremely unlikely to be released.

In October 1996, the Wests' home was demolished, and the site became a simple pathway.

It was suggested by Gordon Burn in his 1998 book on the Wests that Fred West's sociopathy might have been caused by a head injury. He had a motorcycle accident in November 1958 which briefly left him in a coma, with a broken leg, broken arm and skull damage which required a fixative metal plate. According to his brother John West, this accident caused quite a change in personality.

Part of this article consists of modified text from Wikipedia, and the article is therefore licensed under GFDL.
Retrieved from "https://www.monstropedia.org/index.php?title=Fred_West&oldid=8740"
Categories: