In Greek mythology the Erinyes or Eumenides (the Romans called them the Furies) were female personifications of vengeance. 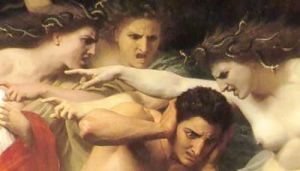 The Remorse of Orestes, part of a painting of William-Adolphe Bouguereau

The Erinyes might also be recognized as Semnai ("the venerable ones"), the Potniae ("the Awful Ones"), the Maniae ("the Madnesses") and the Praxidikae ("the Vengeful Ones"). Many scholars believe that when they were originally referred to as the Eumenides it was not to reference their good sides but as a euphemism to avoid their wrath that would ensue from calling them by their true name.

The Furies were considered hideous in appearance. Like the Keres, they take the appearance of clawed women dressed in black and red with hair bristling of serpants. Sometimes they had the wings of a bat or bird, or the body of a dog. They carry whips and torches and are seen pursuing their victims. Despite their negative interactions with humans, they were called Eumenides, or "kindly ones" in remembrance of their indulgence when Orest seek refuge after his mother’s murder. They are sometimes represented by flies which harass their victims as remorse.

The Furies, or Erinyes in Greek, have an origin that is not completely known; they were born, it is said, from drops of blood that fell from Uranus after he was castrated by his son Cronus. It is also thought that they were the daughters of Mother Earth and Darkness, or of Cronus and Eurynome, or Cronus and Night. Their number is usually left indeterminate, though Virgil, probably working from an Alexandrian source, recognized three: Tisiphone (the avenger), Megara (the jealous), and Alecto (the unresting).

At first, the task of the Furies was to guard the entrance to Tartarus, to make certain that those who entered had atoned for their sins. Those who had not were rejected and had to wander as ghosts. They became better known for their responsibility as punishers of those who offended the Olympians, patricides, and perjurers. Their main function was then to torment those who have committed a sin. Though origionally probably reserved for patricides, matricides, and those who broke their oaths, the Furies eventually would come to punish any sin. They would harass and injure her prey but not kill them. They pursue wrong doers relentlessly, until death, often driving them to suicide. They would extend their torments into the underworld, cruelly lashing the offenders. The sight of them could drive one to madness. The Erinyes were connected with Nemesis as enforcers of a just balance in human affairs. The goddess Nike originally filled a similar role, as the bringer of a just victory. The Furies (their Roman name) or Dirae ("the terrible") typically had the effect of driving their victims insane, hence their Latin name furor.

When not stalking victims on Earth, the Furies were thought to dwell in Tartarus, where they applied their tortures to the damned souls there.

The Erinyes are particularly known for the persecution of Orestes for the murder of his mother, Clytemnestra. Since Apollo had told Orestes to kill the murderer of his father, Agamemnon, and that person turned out to be his mother, Orestes prayed to him. Athena intervened and the Erinyes turned into the Eumenides ("kindly ones"), as they were called in their beneficial aspects.