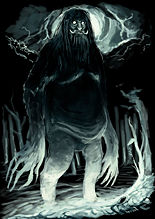 Genderuwa is a Javanese fairy creature.

From the Java language Genderuwo. Sundanese people call it gandaruwo and the Javanese people generally call it gendruwo.

The legend of genderuwa is allegedly rooted in ancient Persian mythology. Genderuwa are spirits believed to come from people who died in a violent way and come back to haunt the living.

Genderuwa is usually invisible to mortals' eyes but may appear as a large furry creature similar to an ape, the body covered with reddish black thick hair that grows in the whole body. Various legends say that genderuwa can also take the appearance of human male to seduce women or increase/decrease its size from a few centimeters to a three meter high stature.

The creature is said to enjoy dwelling around watery, old buildings, large trees that shaded or damp corners of deserted and dark. Some favorite spots are forest areas such as Teak Forest Nature Reserve Danalaya, Slogohimo district, about 60 km east of Wonogiri, and in the White Weak, Purwosari, Girimulyo in Kulon Progo, about 60 km west of Yogyakarta.

The Genderuwo creature is believed to be idle and dissolute, has the tendency to tease people, especially women and children. Genderuwo is sometimes happy slapping a women's rump, caressing her body while she slept, or even to switch women’s undergarments to others. Genderuwo also like to throw stones at people’s houses at night. The Genderuwo is known to tempt lonely wifes when husbands leave or those that become widowed. Sometimes, Genderuwo have sexual relationships with these women in order to impregnate them and produce more Genderuwo.

According to legend, The Genderuwo has a very strong ability to attract women. Genderuwo's sexual game is said to be unusual and that women feel often satisfied and extend extraordinary favors. Genderuwos have very strong libidos and possess seduction skills far superior to men.

However, some genderuwa who appear as an old man, dressed in white who look very dignified, are said to be benevolent.

To summon a genderuwa, one must capture a crow, kill it and cook the meat in a open place so that the creature recognize and is enticed by the smell of his favorite food. After pronouncing a special mantra, the practitioner must immediately ask what they want before genderuwa steal or eat the crow .

Genderuwa has been widely used in many entertainment media, mainly in horror fiction and horror films from Indonesia and Malaysia where Javanese communities still practice the beliefs and culture of Java. The mystical romance comic serialized The svelte was published in the daily Suara Merdeka in the 1990s in Indonesia. A Genderuwo horror film released in 2007 in Indonesia also borrows many elements from the genderuwa legend.