In demonology, Gremory is a strong Duke of Hell. 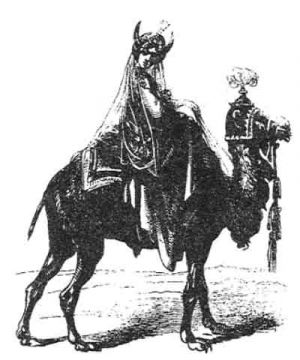 Gremory is a powerful duke of hell who commands 26 legions.

Gremory is depicted as appearing in the form of a beautiful woman with the crown of a duchess tied around her waist, and riding a camel.

Gremory tells all things past, present and future, about hidden treasures, and procures the love of women, young and old, but especially maidens.

Gomory a strong and a mightie duke, he appeareth like a faire woman, with a duchesse crownet about hir midle, riding on a camell, he answereth well and truelie of things present, past, and to come, and of treasure hid, and where it lieth: he procureth the love of women, especiallie of maids, and hath six and twentie legions. Pseudomonarchia daemonum - Johann Wier (1583)

The Fifty-sixth Spirit is Gremory, or Gamori. He is a Duke Strong and Powerful, and appeareth in the Form of a Beautiful Woman, with a Duchess's Crown tied about her waist, and riding on a Great Camel. His Office is to tell of all Things Past, Present, and to Come; and of Treasures Hid, and what they lie in; and to procure the Love of Women both Young and Old. He governeth 26 Legions of Spirits, and his Seal is this, etc. Goetia - S. L. MacGregor Mathers (1904).