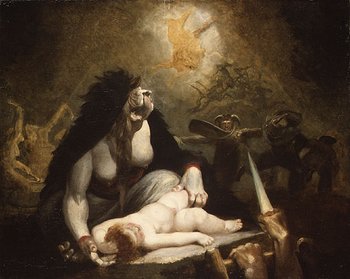 A hag (or crone) is a kind of malevolent, wizened old woman, or a kind of fairy having the appearance of such a woman, often found in folklore and children's tales such as Hansel and Gretel. The term appears in Middle English, and might be short for hægtesse, an Old English term for witch. [1].

More specifically, a hag or "the Old Hag" was a nightmare spirit in British and also Anglophone North American folklore which is essentially identical to the Anglo-Saxon mæra – a being with roots in ancient Germanic superstition, and closely related to the Scandinavian mara. According to folklore, the Old Hag sat on a sleeper's chest and sent nightmares to him or her. When the subject awoke, he or she would be unable to breathe or even move for a short period of time. Currently this state is called sleep paralysis, but in the old belief the subject had been hagridden. [2] It is still frequently discussed as if it were a para-normal state. [3]

In Irish and Scottish mythology Cailleach was a goddess concerned with creation, harvest, and the underworld. The Three Fates (particularly Atropos) are often depicted as hags.

In Persian folklore, Bakhtak (Baxtak) has had somehow the same role as that of "the Old Hag" in British folklore. "It" sits on a sleeper's chest, awakening them and causing them to feel they are unable to breathe or even to move. Bakhtak also is used metaphorically to refer to "nightmare" in Modern Persian language.

Many stories about hags seem to have been used to frighten children into being good. Peg Powler, for example, was a river hag who lived in river trees and had skin the color of green scum. Parents told their children that, if they got too close to the water, she would pull them in with her extra long arms, drown them, and sometimes eat them. The parents hoped that the children would be afraid of the hag so they wouldn't go anywhere near the water. That way, they'd never fall in and drown. Peg Powler has other regional names, such as Jenny Greenteeth from Yorkshire and Nellie Longarms from several English counties.

Within Wiccan and other Neo-pagan communities the term crone refers to the elder aspect of the triple goddess (Maiden-Mother-Crone), or the older aspect of the Mother goddess. It is also reserved for honored elder women. It is a term of respect, acknowledging the wisdom and strength that comes with age.

The expression Old Hag Attack refers to a hypnagogic state in which paralysis is present and, quite often, it is accompanied by terrifying hallucinations. When excessively recurrent, some consider them to be a disorder while many populations treat them as part of their culture as discussed in the sections dealing with the folkloric and mythologic interpretations.

For neurobiological correlates of these attacks see, among others, the references given below.

In the Dungeons & Dragons game, "hags" are at least three races of female creatures, sort of female counterparts to ogres. They are the annis (named from an analogous creature from the British folklore), the green hag (a green-skinned version of the Slavic Baba Yaga), and the sea hag (a sea witch, not a mermaid). All three sorts are evil, but not overly powerful.

Hags are occasionally mentioned in the Harry Potter series, but never in any great detail (the prologue of "Fantastic Beasts and Where to Find Them" mentions that children are part of their diet and that they can glide), and also in the Chronicles of Narnia. In The Lion, the Witch and the Wardrobe, Hags are one of the various kinds of evil creatures whom the White Witch has present at the killing of Aslan. A Hag, along with a Werewolf and the dwarf Nikabrik, later tries to persuade Prince Caspian to summon the Witch back to life. They attack after being refused, and are killed.

The word hag is usually used in the videogame Banjo Kazooie (and sequels), refering to Gruntilda, the witch and her sisters, Blobelda and Mingella.