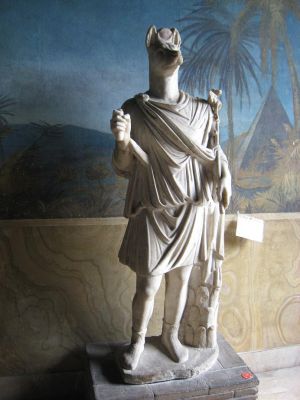 In classical mythology, Hermanubis was a god who combined Hermes (Greek mythology) with Anubis (Egyptian mythology). Hermanubis was popular during the period of Roman domination over Egypt. He is the son of Osiris and Nephthys.

Just like Anubis, Hermanubis was represented as a canine-headed man, but portrayed with winged sandals, and carrying Hermes caduceus in his hand. Instead of being strongly associated with funeral rituals and embalming, emphasis was placed upon his role as a guide, leading the souls of the dead through the underworld.

After the Greeks and Romans took over Egypt, the cult of Anubis became assimilated with that of the Greek messenger god, Hermes, and a new, combined deity was created - Hermanubis.

The centre of this cult was in Cynopolis, a place whose Greek name simply means "city of dogs". In Book XI of The Golden Ass by Apuleius, we find evidence that the worship of this god was maintained in Rome at least up to the 2nd century. Indeed, Hermanubis also appears in the alchemical and hermetical literature of the Middle Ages and the Renaissance.

Scholar Hugh Trotti has speculated in 1990 that distorted accounts of the sightings of canine-masked priests of the god in Rome and Egypt by German mercenaries may ultimately have inspired legends of berserkers and werewolves, i.e. humans who could transform themselves into wolves.