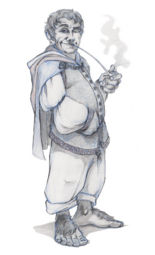 Portrait of a hobbit.

Hobbits are a fictive diminutive race that inhabit in the Shire and in Bree in northwestern Middle-earth of J. R. R. Tolkien's world.

Known as "Halflings" to most and "Periannath" by the Elves, the word "Hobbit" is derived from the name "Holbytlan" which means "hole-dwellers" in the tongue of the Rohirrim.

Whilst 'The Hobbit' introduced this race of comfortable homebodies to the world, it is only in writing 'The Lord of the Rings' that Tolkien developed details of their history and wider society. They are also very briefly mentioned in 'The Silmarillion'. The word and the concept seem to have been inspired by 'The Marvellous Land of Snergs', a children's book from 1927 by E. A. Wyke-Smith, and by Sinclair Lewis's novel 'Babbitt' (1922). The Snergs were, in Tolkien's words, "a race of people only slightly taller than the average table but broad in the shoulders and of great strength."[3] Tolkien wrote to W. H. Auden that 'The Marvellous Land of Snergs' "was probably an unconscious source-book for the Hobbits, not of anything else", and he told an interviewer that the word hobbit "might have been associated with Sinclair Lewis's Babbitt (some say 'rabbit').

In the introduction to 'The Lord of the Rings' Tolkien said that Hobbits are between two and four feet (0.6-1.2 m) tall, the average height being three feet six inches (1 m). They tend toward stoutness and have slightly pointed ears.[6] Tolkien describes Hobbits thus:

I picture a fairly human figure, not a kind of fairy rabbit as some of my British reviewers seem to fancy: fattish in the stomach, shortish in the leg. A round, jovial face; ears only slightly pointed and 'elvish'; hair short and curling (brown). The feet from the ankles down, covered with brown hairy fur that are extremely small. Clothing: green velvet breeches; red or yellow waistcoat; brown or green jacket; gold (or brass) buttons; a dark green hood and cloak (belonging to a dwarf).[7]

In the 'Prologue to The Lord of the Rings' he wrote that they dress in bright colours, favouring yellow and green. Nowadays (according to Tolkien's fiction), they are very shy creatures, but they are and have been capable of amazing things. They are adept with slings and throwing stones.

Their feet are covered with curly hair (usually brown, as was the hair on their heads) with leathery soles, so most Hobbits hardly ever wear shoes. Hobbits (and derivative Halflings in other fantasy settings) are often depicted with large feet for their size, perhaps to visually emphasize their unusualness. This is especially prominent in the influential illustrations by the Brothers Hildebrandt and the large prosthetic feet used in the Peter Jackson films. Tolkien does not actually give foot size as a generic trait, but makes it the distinctive trait of a hobbit clan, the Proudfoots (or Proudfeet).

Characters within Tolkien's works consider Hobbits to be a separate race from Men, but Tolkien made it clear that they are actually an offshoot of the race of Men; they and the "Big Folk" are far more closely related to each other than to either Elves or Dwarves. Thus Hobbits are among the Younger Children of Eru Ilúvatar and are the result of the same act of creation as Men.

Hobbits can sometimes live for up to 130 years, although their average life expectancy is 100 years. The time at which a young Hobbit "comes of age" is 33. Thus a fifty-year-old Hobbit would only be entering middle age.

Hobbits are fond of an unadventurous bucolic life of farming, eating, and socializing. They enjoy at least seven meals a day, not including snacks, when they can get them - breakfast, (arguably) second breakfast, elevenses, luncheon, tea, dinner and later, supper. They like simple food such as bread, meat, potatoes, and cheese, have a passion for mushrooms, and also like to drink ale, often in inns — not unlike the English countryfolk, who were Tolkien's inspiration. The name Tolkien chose for one part of Middle-earth where the Hobbits live, "the Shire" is clearly reminiscent of the English Shires. Hobbits also enjoy an ancient variety of tobacco, which they referred to as "pipe-weed", something that can be attributed mostly to their love of gardening and herb-lore.

The Hobbits of the Shire developed the custom of giving away gifts on their birthdays instead of receiving them.[8] They use the term mathom for old and assorted objects, which are invariably given as presents many times over or are stored in a museum (mathom-house).

Some Hobbits live in "hobbit-holes", which were the original places where they dwelt underground. They were found in hillsides, downs, and banks. By the late Third Age, they were replaced by brick and wood houses, however, some older style Hobbit-holes are still in use by more established Shirefolk, such as Bag End and Great Smials. Like all Hobbit architecture, they are notable for their round doors and windows, a feature more practical to tunnel-dwelling that the Hobbits retained in their later structures.

The Hobbits had a distinct calendar, every year started on a Saturday and ended on a Friday, with each of the twelve months consisting of thirty days. Some special days did not belong to any month- Yule 1 and 2 (New Years Eve & New Years Day) and three Lithedays in mid summer. Every fourth year there was an extra Litheday.

Historically, the Hobbits are known to have originated in the Valley of Anduin, between Mirkwood and the Misty Mountains. According to The Lord of the Rings, they have lost the genealogical details of how they are related to the rest of mankind. At this time, there were three "Hobbit-kinds", with different physical characteristics and temperaments: Harfoots, Stoors and Fallohides. While situated in the valley of the Anduin River, the Hobbits lived close by the Éothéod, the ancestors of the Rohirrim, and this led to some contact between the two. As a result many old words and names in "Hobbitish" are derivatives of words in Rohirric.

The Harfoots, the most numerous, were almost identical to the Hobbits as they are described in The Hobbit. They lived on the lowest slopes of the Misty Mountains and lived in holes, or Smials, dug into the hillsides. The Stoors, the second most numerous, were shorter and stockier and had an affinity for water, boats and swimming. They lived on the marshy Gladden Fields where the Gladden River met the Anduin (there is a similarity here to the hobbits of Buckland and the Marish in the Shire. It is possible that those hobbits were the descendants of Stoors). The Fallohides, the least numerous, were an adventurous people that preferred to live in the woods under the Misty Mountains and were said to be taller and fairer (all of these traits were much rarer in later days, and it has been implied that wealthy, eccentric families that tended to lead other hobbits politically, like the Tooks and Brandybucks, were of Fallohide descent).

About the year T.A. 1050, they undertook the arduous task of crossing the Misty Mountains. Reasons for this trek are unknown, but they possibly had to do with Sauron's growing power in nearby Greenwood, which was later named Mirkwood because of the shadow that fell on it as Sauron searched the area for the One Ring. The Hobbits took different routes in their journey westward, but as they began to settle together in Bree-land, Dunland, and the Angle formed by the rivers Mitheithel and Bruinen, the divisions between the Hobbit-kinds began to blur.

In the year 1601 of the Third Age (year 1 in the Shire Reckoning), two Fallohide brothers named Marcho and Blanco gained permission from the King of Arnor at Fornost to cross the River Brandywine and settle on the other side. Many Hobbits followed them, and most of the territory they had settled in the Third Age was abandoned. Only Bree and a few surrounding villages lasted to the end of the Third Age. The new land that they founded on the west bank of the Brandywine was called the Shire.

Originally the Hobbits of the Shire swore nominal allegiance to the last Kings of Arnor, being required only to acknowledge their lordship, speed their messengers, and keep the bridges and roads in repair. During the final fight against Angmar at the Battle of Fornost, the Hobbits maintain that they sent a company of archers to help but this is nowhere else recorded. After the battle, the kingdom of Arnor was destroyed, and in absence of the king, the Hobbits elected a Thain of the Shire from among their own chieftains.

The first Thain of the Shire was Bucca of the Marish, who founded the Oldbuck family. However, the Oldbuck family later crossed the Brandywine River to create the separate land of Buckland and the family name changed to the familiar "Brandybuck". Their patriarch then became Master of Buckland. With the departure of the Oldbucks/Brandybucks, a new family was selected to have its chieftains be Thain: the Took family (Indeed, Pippin Took was son of the Thain and would later become Thain himself). The Thain was in charge of Shire Moot and Muster and the Hobbitry-in-Arms, but as the Hobbits of the Shire led entirely peaceful, uneventful lives the office of Thain was seen as something more of a formality.

The Hobbits' numbers dwindled, and their stature became progressively smaller after the Fourth Age. However, they are sometimes spoken of in the present tense, and the prologue "Concerning Hobbits" in The Lord of the Rings states that they have survived into Tolkien's day.[9]

Though in The Hobbit it is mentioned that Gandalf "was responsible for so many quiet lads and lasses going off into the Blue for mad adventures", no female Hobbits are depicted in Tolkien's stories explicitly doing so; however Hobbit women do appear in his works, such as the formidable Lobelia Sackville-Baggins. He does say that Bilbo's mother, Belladonna Took, "never had any adventures after she became Mrs. Bungo Baggins", and this might be taken to imply that she had some before.

Fossils of diminutive humans discovered on the Indonesian island of Flores in 2004 were informally dubbed "hobbits" by their discoverers, although it is now thought by some anthropologists that the fossils represent an extinct species, Homo floresiensis.

Along with dwarves and elves, hobbits have become a common feature of many fantasy games, both pen-and-paper role-playing games and computer games. Examples of games which feature hobbits include the Quiz Magic Academy series, Lufia: The Ruins of Lore, and Disgaea: Hour of Darkness.

However the word "Hobbit" is a trademark owned by the Tolkien estate. For this reason 'Dungeons & Dragons' and other fantasy most often refer to hobbit-like creatures by another name, most commonly as halflings (alternatives include hin in the Mystara universe, hurthlings in Ancient Domains of Mystery, and Bobbits in the Ultima series).

Part of this article consists of modified text from Wikipedia, and the article is therefore licensed under GFDL.
Retrieved from "https://www.monstropedia.org/index.php?title=Hobbit&oldid=11164"
Categories: