Hobgoblin is a term typically applied in folktales to a friendly or amusing goblin. 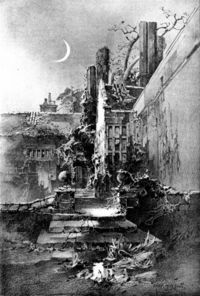 The word seems to derive from 'Robin Goblin', abbreviated to 'hobgoblin', 'hob', or 'lob'. The name originally referred to a specific folkloric character Robin Goodfellow but has grown to be defined as a different species of goblin or fairy. In French folklore, hobgoblins are called Lutin.

The name is often interchangeable with "bugbear", "boogeyman", "bugaboo" or "bogie", and the term "hobgoblin" has grown to mean a superficial object that is a source of often imagined fear or trouble; probably the most well-known example of this usage is Ralph Waldo Emerson's line, "A foolish consistency is the hobgoblin of little minds," from the essay Self-Reliance.

Lord of the Rings

In The Hobbit, by J.R.R. Tolkien, Hobgoblins are a menacing, larger and stronger form of goblins. Tolkien later remarked in a letter that through further study of folklore he had subsequently learned that "the statement that hobgoblins were 'a larger kind' (of goblins) is the reverse of the original truth". This mistaken reversal in size on Tolkien's part has generally been followed in other fictional 'hobgoblins'.

Another hobgoblin is in Monster in My Pocket #23. In the comic book series, he is a prankster who serves as comic relief among the good monsters. He makes fire come out from his fingers.

Part of this article consists of modified text from Wikipedia, and the article is therefore licensed under GFDL.
Retrieved from "https://www.monstropedia.org/index.php?title=Hobgoblin&oldid=9630"
Categories: