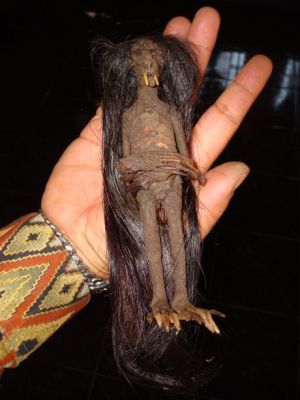 A jenglot displayed by his owner

A jenglot is a tiny, living human doll in Indonesian and Malaysian folklore

Jenglot is described as a living, creepy mummy about 15cm to 20cm length, with staring eyes and long nails. The body's flesh appears fossilized. The face of a jenglot is shaped like a skeleton or a zombie with prominent canines and long hair on its head that is said to be able to grow over time. The feet are purported to be joined, giving it a mermaid-like appearance.

Jenglot is believed to be found in Indonesia, especially in Java. They are mostly found by native psychics after they have performed a supernatural ceremony. Jenglots are said to be found anywhere, from under the ground, on a wrecked house roof, and even in the trunk of a huge tree.

According to an Indonesian legend, Jenglot was a monk who wanted to learn the "Ilmu Bethara Karang" or the way to eternal life.

People who have caught the jenglot usually bring their creature all over Indonesia to exhibit them in order to gain some money. There are many jenglots exhibited on the islands of Java and Sumatra, or held in private collections of supernatural researchers and fans. Many were found to be hoaxes, made from parts of monkey and fish by masterful taxidermists.

Jenglot 'keepers' feed their creature with blood, either animal blood (goat) or human blood. The jenglot is said to not drink the blood directly. The person places the jenglot near the blood, but the jenglot doesn't even move or touch the blood. It is said that the jenglot will get the nutrients of the blood in their own way.

Jenglots are used in black magic to cast spells or give their owner supernatural abilities. However, if not feed and treated properly, jenglots can turn back on their owners.