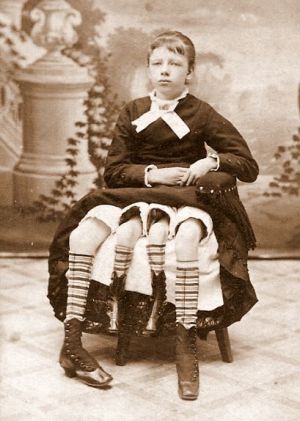 Corbin was a dipygus case. The duplication begins just above the waist, the spinal column dividing at the third lumbar vertebra, below this point everything being double. She had two small pelves side-by-side, and each of her smaller inner legs was paired with one of her outer legs. The tiny body of her twin was only fully developed from the waist down and even then it was malformed – tiny and possessing only three toes on each foot. Myrtle was able to control the limbs of her sister but was unable to use them for walking and she herself had a difficult time getting around as she was born with a clubbed foot. Micturition and defecation occur at different times. In Anomalies and Curiosities of Medicine by George M. Gould and Walter L. Pyle, it was observed that both vaginas menstruated - thus indicating both were possibly sexually functional. It was even said that she had two functional reproductive systems, and had her children from both sides.

Josephene Myrtle Corbin was born on May 12, 1868, in Lincoln County Tennessee. When she was five weeks old, Corbin's father started charging a small fee to let people have a look at his four-legged daughter. As she grew older, he took her to fairs, sideshows and dime museums across the country. After she turned 14, her father got her a contract to appear with P.T. Barnum's traveling exhibition at a salary of $250 per week. She retired from show business at age 19 when she married Dr. Clinton Bicknell, and subsequently gave birth to five children: four daughters and a son. In 1909, once her children had grown up, she started appearing at Huber's Museum in New York as the Four-Legged Woman. This led to more engagements with Ringling Brothers and at Coney Island, where she was soon making $450 per week. She would often dress the extra limbs with socks and shoes matching her own and this gave her a truly surreal appearance. Corbin passed away on May 6, 1928 in Cleburne, Texas.